LEGO Christmas Trees - The Good, The Bad, & The Ugly

When i first heard about this model i knew i had to get it, becouse, well, it happens that i live in Venice and it's not an everyday thing that Lego releases an architecture set of your city! Seeing the Saint Mark lion printed on a brick gave me a really funny feeling! 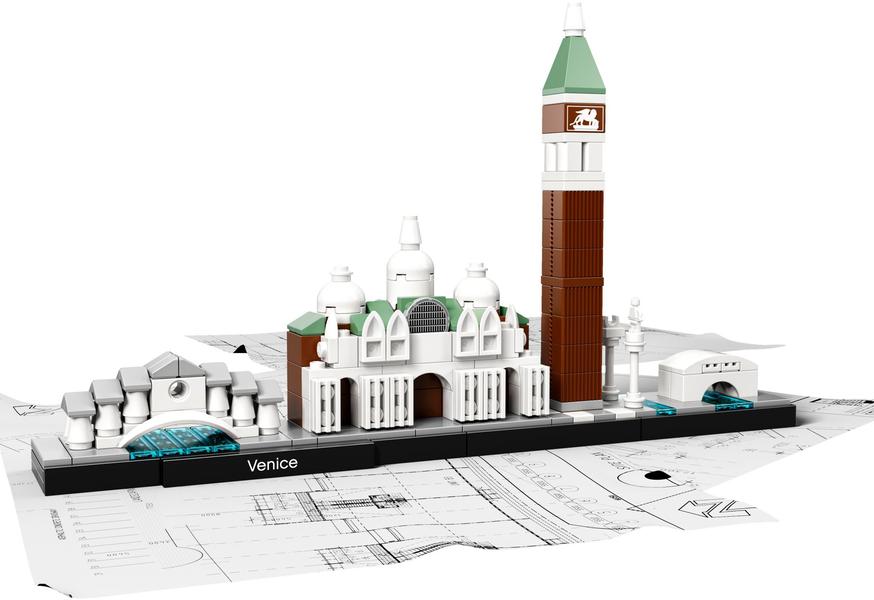 The box is the usual high quality Architecture type, with closing lid and fine printing. The back shows picture of the real monuments and their respective Lego incarnations. 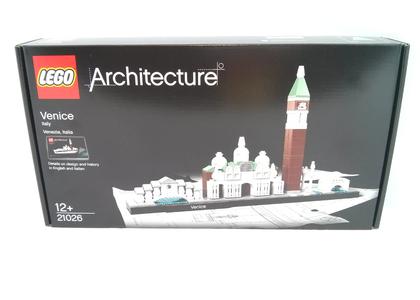 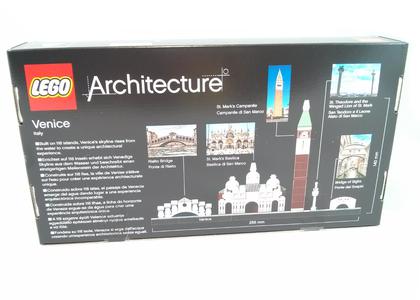 Inside we found 212 parts grouped into three bags, a thick instruction booklet and an extra promotional/survey flyer. 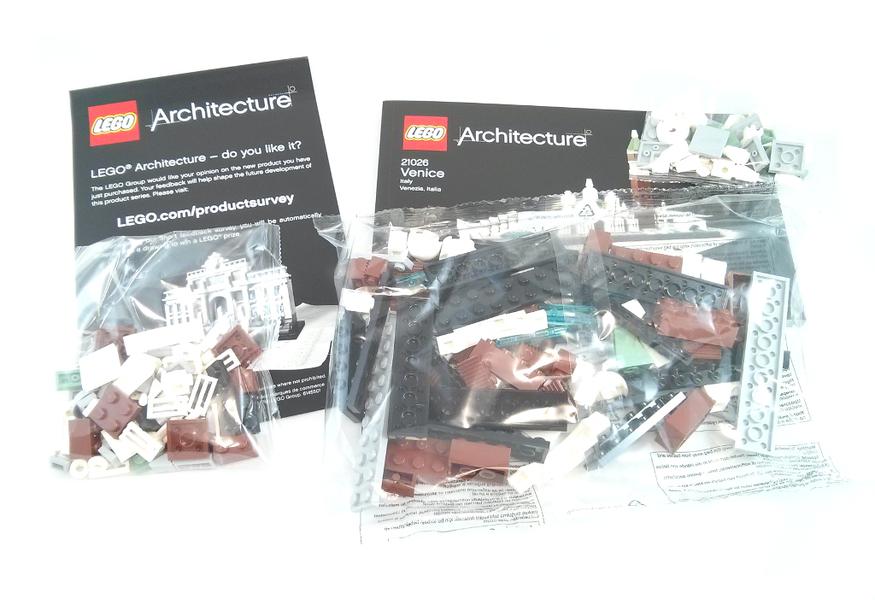 The booklet is huge (especially considering the piece count!), and a good half of it is dedicated to descriptions of the city historical point of interests, both in English and Italian, with high quality pictures. 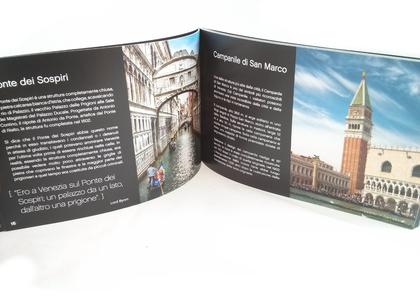 Part wise, the set is not very interesting, with no new elements and a single new recoloring: the 3688 Slope 75 2 x 2 x 2 Quadruple Convex in Sand Green. Other interesting parts include the 2x2 corner tiles, quite common now but still a newish design, a white nanofig (plus an extra), the customary printed black tile with the name of the Architecture model and a 2x2 with the already mentioned Saint Mark lion print. 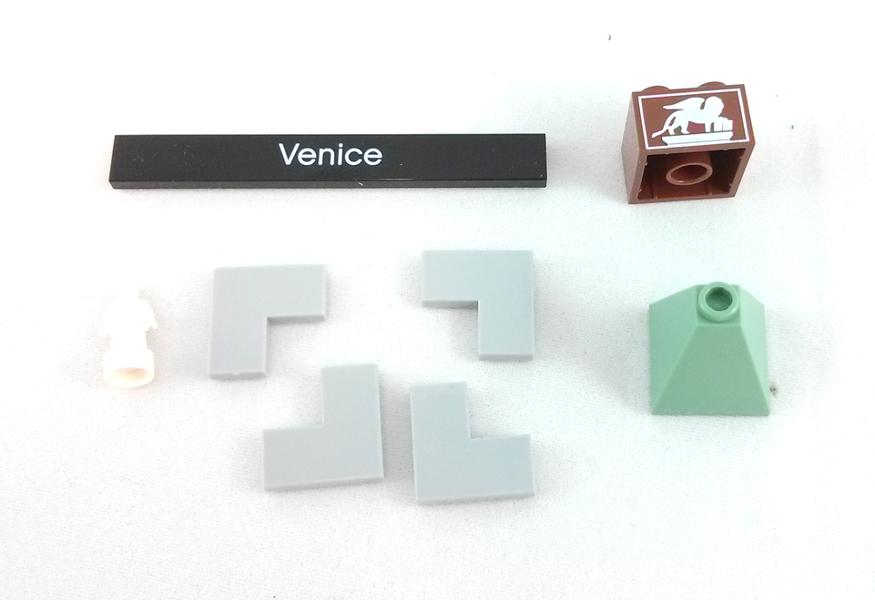 The build start with a two plate high base both very long and narrow (4 studs deep), which makes for an unusual build: 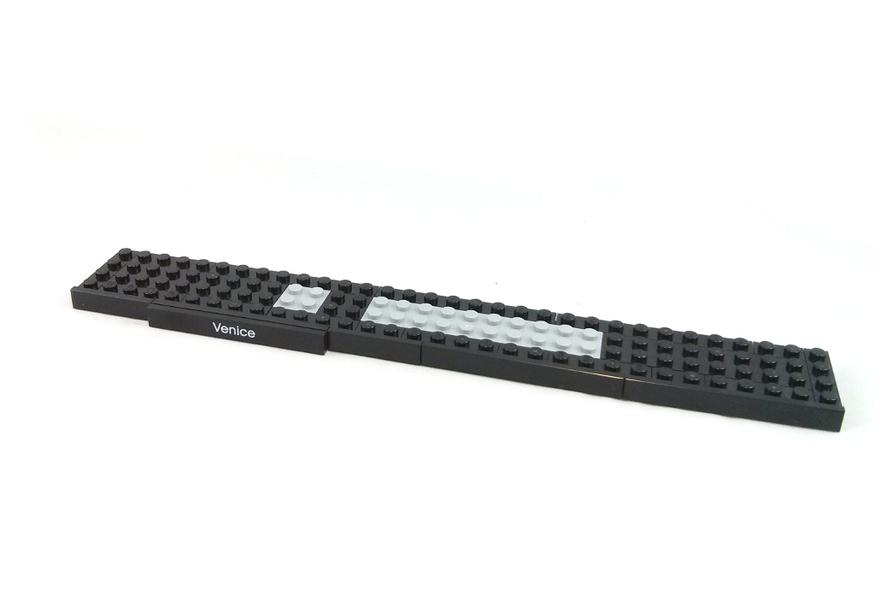 The base is then covered with the floor, featuring three canals and some tiled pavement. 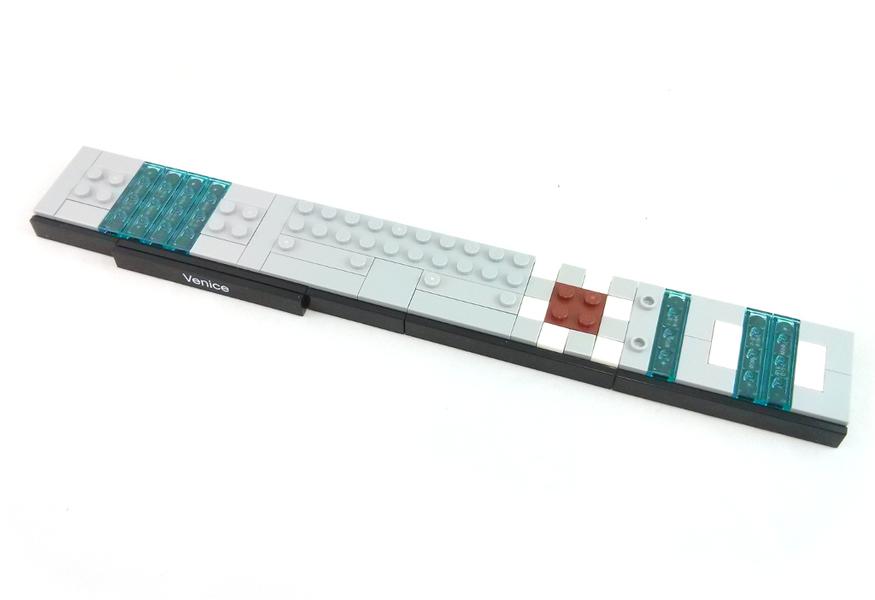 The first item to be built is the Rialto Bridge, one of the oldest bridges in Venice and among the main landmarks of the city. 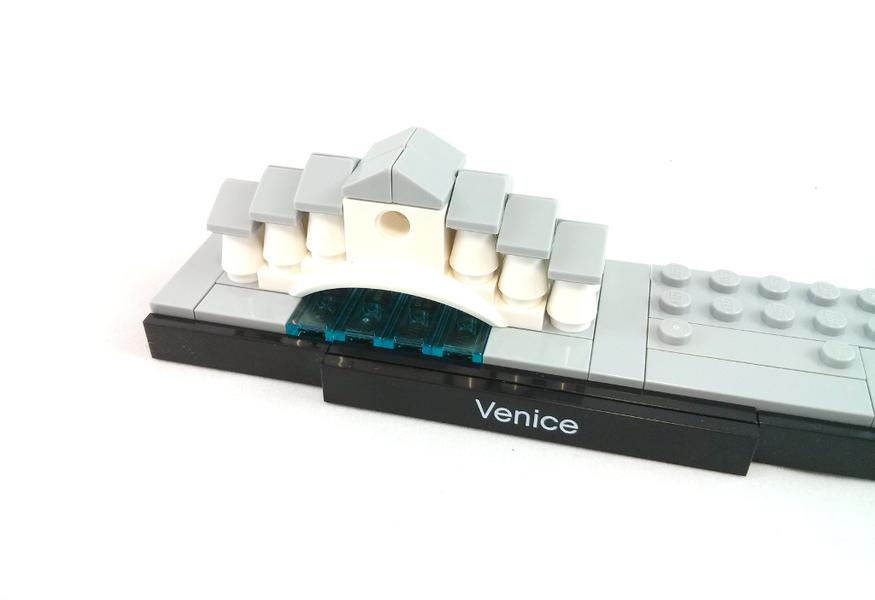 It is built very simply with 1x1 cones and cheese slopes over a couple of mudguards, but it really works in conveying the general shape and look of the real thing. Sure, the internal walkway (with the famouse parade of small shops) is gone but at this scale, it's about as perfect as you can get and definitely an awesome job.

This is the only monument of the bunch to be located in a different area, about 500 meters from Piazza San Marco in the vicinity of which all other things are located.

Next up is the Saint Mark Basilica, right in Saint Mark Square, which is the densest mini build of the model. It starts with some brown bricks for foundation: 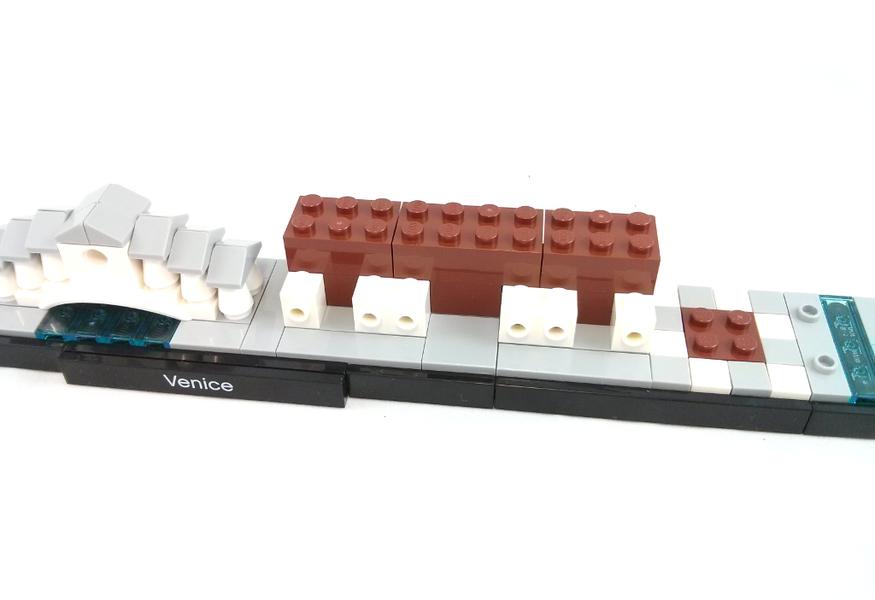 At this point, in the instruction booklet, i was surprised to meet the latest trend in foolproofing building instructions: 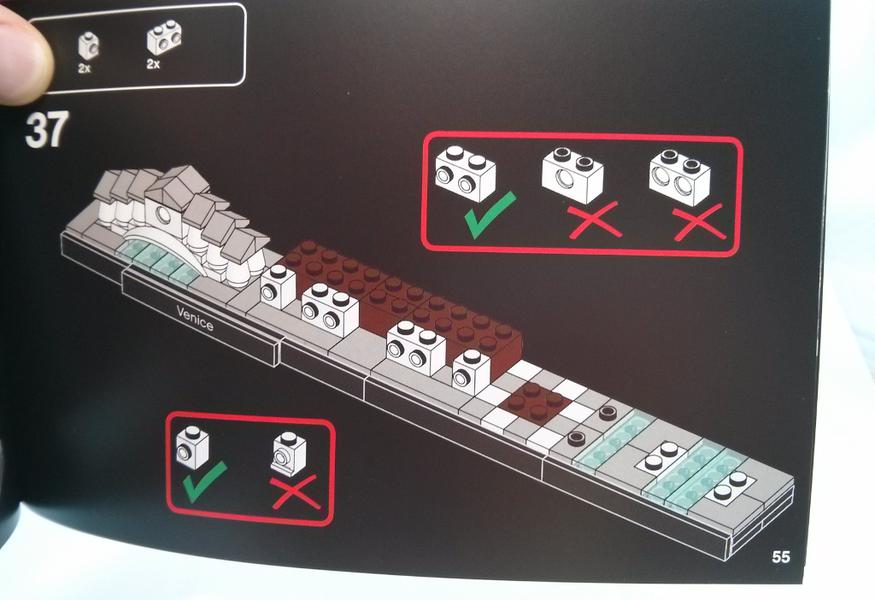 Boxes that advise you not to pick the wrong kind of brick. I mean, was it really necessary? I know Architecture sets are targeted to casuals too, but it still seems too much. Ah the good old days when you used to build a 150+ pices, 4-piston full engine in a single page! 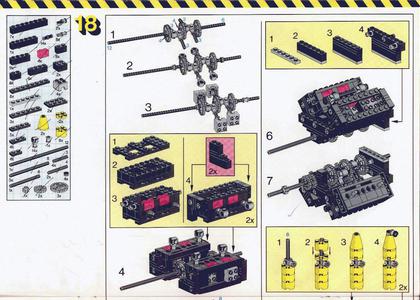 Next up we build the specular sides of the Basilica, and finally the central body 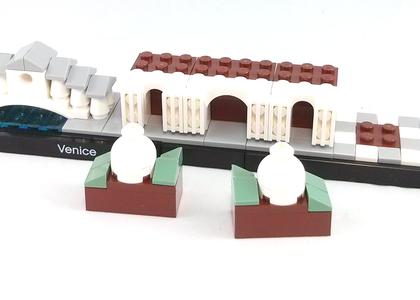 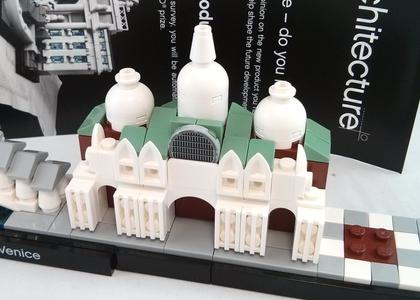 Honestly the round 2x2 tiles feels a little out of place in there, probably becouse of the print. It's actually rather effective, together with the lowest arch, in capturing the curves of the original material, but perhaps a custom print would have worked better. Anyway, the whole micro build is still very nice and about as good as you can get it at this scale.

And now we arrive at the Campanile di San Marco, which is the eyecatcher of the set and is both trivial and true to the original, as the Campanile is just a long cuboid and therefore quite easy to replicate in Lego. The highlight of this microbuild is the exclusive printed brick. 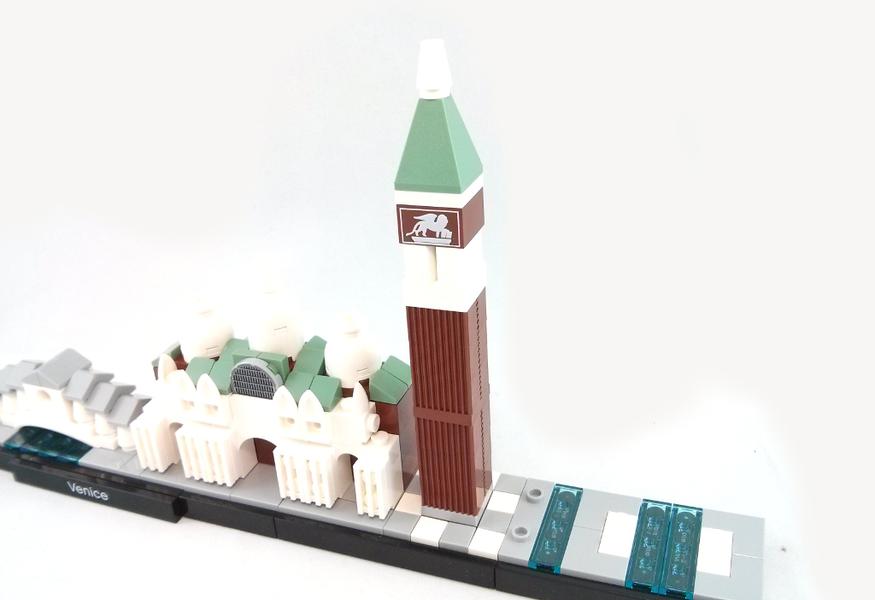 The next monuments are two columns that resides near the Basilica and Campanile, one of them has San Todaro (St. Theodore) on top, and is rendered with a nanofig (a great tiny representation of a minifigure first appeared as an Oscar statuette some years ago). The other statue is St. Mark lion, represented by a single 1x1 tile with clip on top. Not very lionesque, but still a good choiche all things considered. It works pretty good next to the nanofig. 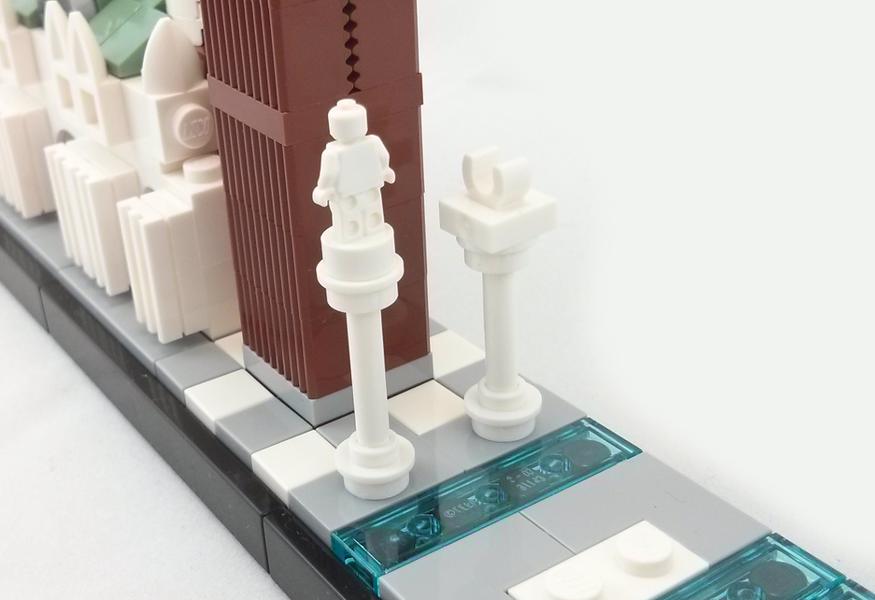 The last monument is Ponte dei Sospiri, or Bridge of Sighs, an enclosed bridge that connects the interrogation rooms of the Doge's Palace to the prisons. The name allegedly derives from the prisoners which would sigh as they pass on their way to the prisons, seeing Venice for the last time. As usual in this cases, there's more legend than truth, but it still makes the bridge a top tourist attraction. In it's lego form, the curved shape is conveied with a bottom arch and a top curved brick, while the small, grated windows are cleverly realized with the holes in the profile of grill tiles. The overall rendition clearly loses the elaborate baroque decorations of the real bridge, but is successful in capturing the shape and is very recognizable. 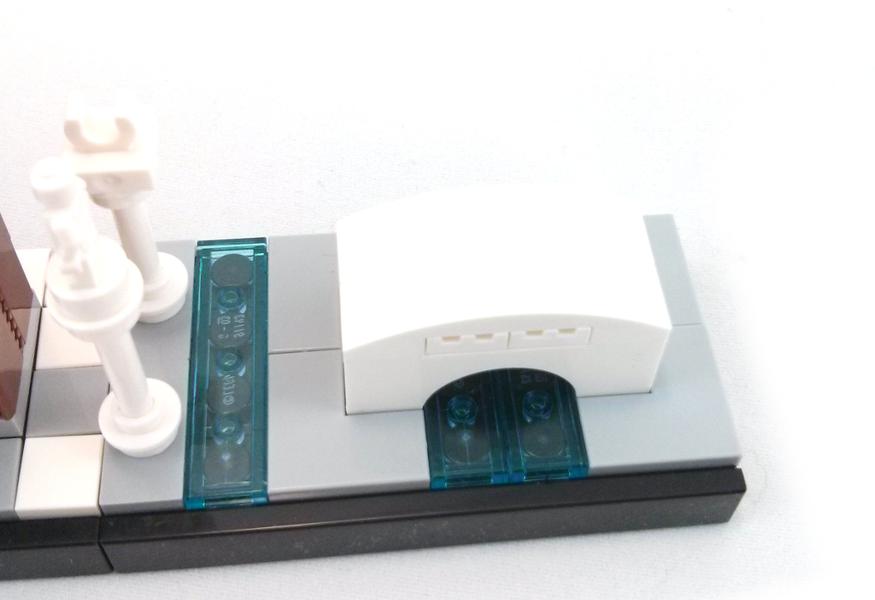 I loved this new "skyline" subtheme of Architecture since i saw it, and i'm probably very biased but i think this is one of the best. It's instantly recognizable (thanks mostly to the Campanile), but also quite beautiful on its own. The narrow form factor makes for a great display piece even in the smallest places: it is currently showing off at my workplace just under my monitor!

So the only critiques i can make is about the printed round tile (which is still a minor thing) and of course the price: not as bad as other Architecture sets, but still high for a Lego set. Of course the high quality booklet provide value beside the "plastic" so it's up to decide if it's worth. For me it's surely a must have!