Parks in LEGO City have become a dangerous place crawling with wild animals and homeless dogs!

This is a quick photo review of set 31044 Park Animals which is a new addition in a series of 3-in-1 Creator sets depicting various animals. This time we get either a dog and a duck with ducklings, or an owl, or a squirrel.

Meet the cute 3-in-1 Park Animals!

Take care of the cute dog with its big puppy eyes, large floppy ears and black shiny nose, and the caring duck with its ducklings. These endearing Park Animals come with posable joints and an authentic color scheme. When you feel like a change, rebuild to create a scurrying squirrel or a wise owl.

The box has a standard size, the same as, for example, last year's 31031 Rainforest Animals. This will come in handy if you store unopened sets in your collector's vault.

The front side of the box features a large picture of the main option of the set and 2 small pictures of the alternates.

The rear side of the box shows all of the available models together which may be quite misleading as one needs to buy three copies of the set to recreate this scene (which I actually did, but for my own reasons).

The top side of the box presumably tells a story of how the hunter becomes the prey.

The contents of the box include 3 instruction booklets for alternative models and 3 (that was predictable) separate small bags with parts.

Instructions seem oversimplified even for the given age range. Most steps consist in connecting of just a single part, and constant turning of pages quickly becomes annoying.

The color scheme of the set is quite diverse, and the inclusion of both Dark Orange and Reddish Brown seems controversial.

Check out the full inventory to see all the details. We also have separate inventories for each of the models in the set so you can check if you already have the right parts to build at least one of them.

Simplistic but easily recognizable models of a drake mallard and three little ducklings.

The dog is the biggest model in the set with the most posing capabilities. It can even stand upright and take rather strange poses such as the examples shown below.

SNOT assembly for the leg and the head

Body parts prior to assembling

Dog pretending to be a kangaroo

Spare parts left after the main set of models

As far as I know, owls are not the most common park animals. Still this is a very cute model. Note that it can turn its head backwards just like a real owl.

SNOT assembly for the body

SNOT assembly for the head

The squirrel is the least impressive model with limited posing capabilities and unappealing coloring.

SNOT assembly for the head

As I mentioned before, one needs to buy three copies of the set to build the full ensemble.

The same plus the primary models of set 31031 "Rainforest Animals"

The ugly truth about nature

Thank you for your attention! 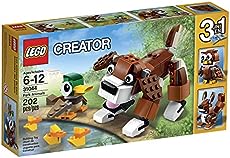 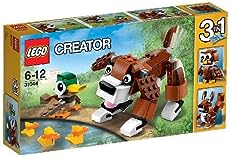 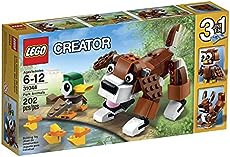 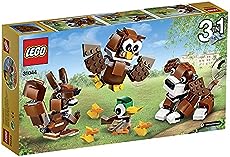 Creator-Tiere im Park
$37.61
Bestseller
(1)
DEAL OF THE DAY
ENDS IN
Ads by Amazon