How to Build a LEGO SpaceX Falcon Heavy Rocket - Part 1

Madoca's Icarus Supercar is a 1:10 scale model of the McLaren P1. Madoca says it's heavily inspired by the McLaren, due to some small differences, but it looks damn close to me.

I actually built the car several months ago, but am only now getting around to writing about it. Largely because I struggled with the SBricks, but also because I'm lazy!

I was short several hundred parts required to build this MOC, so the Rebrickable Multi-Buy feature was very useful. Using that single page, I was able to place the 6-7 orders I needed across multiple BrickLink and BrickOwl stores to buy my missing parts. Normally, shipping is a huge expense for me (Australia tax!) but the ability to mark stores as "Favourites" was a great help in limiting to stores that I knew had decent shipping rates. OK, enough Rebrickable feature promotion for now :)

Madoca has created photographs of the steps required to build the Icarus. Building from photographs can be challenging (in a good way), and Madoca has done an excellent job of laying out the steps. Just pay a little more attention to the parts required, such as counting the axle lengths, and especially checking the angled connector numbers (not always obvious from a photo).

I was actually a bit stumped on the very first page of instructions, until I realised the parts were resting on top of each other and not connected yet. I got the hang of it pretty quickly though. 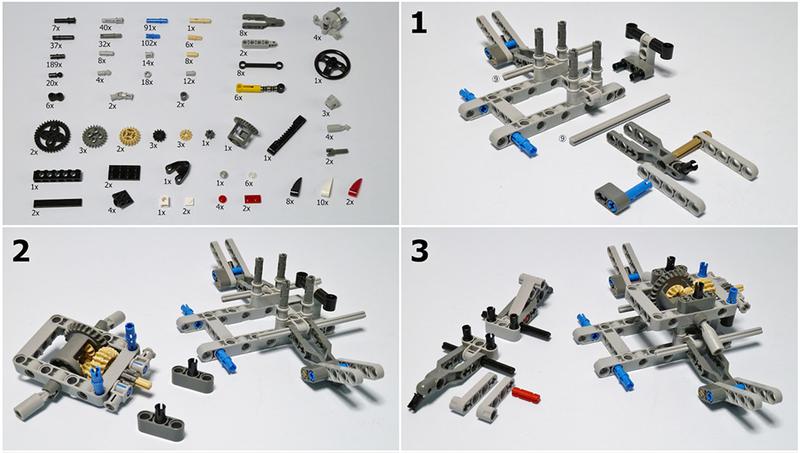 You realise how much work has gone into arranging the photos in a way that makes it unambiguous what parts go where, and in enough detail to show several steps at the same time. Sometimes it was a bit of a puzzle how to build a sub-part using only the parts available, but that was an enjoyable part of the build experience too.

Before starting the build, I pre-picked all the parts I would need. This really helped as some steps required picking eg an axle or pin that couldn't be seen in the photos but there is only one option from your parts that could possibly work.

Throughout the build, there is lots of cross-dimensional bracing that makes it very strong (and difficult to pull apart for the next MOC!). 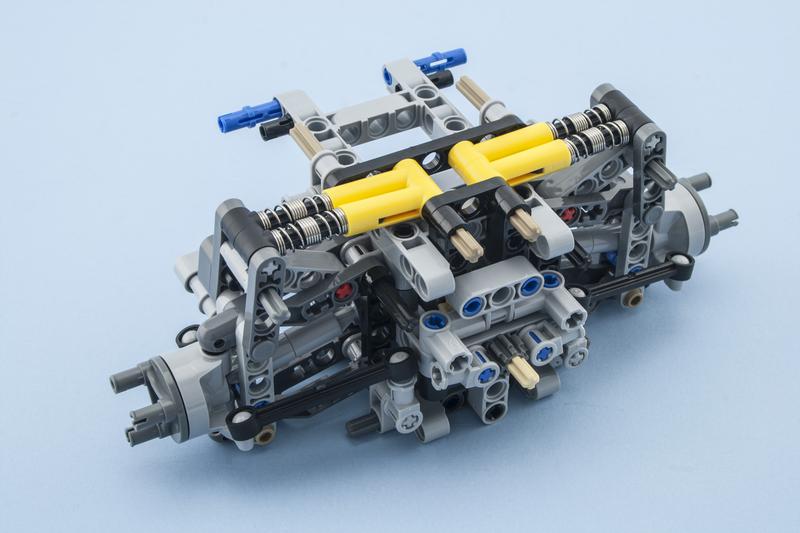 The motors are embedded deep in the structure and close to the wheels, where they can apply their power most efficiently.

The four large motors are actually all connected to the same drive-train. This can be problematic if they are not all running at the same speed, and might cause some degradation of the motor internal gears, or the external lego gears if used for long periods. However, the extra power when all four are running together is what gives this car it's speed. 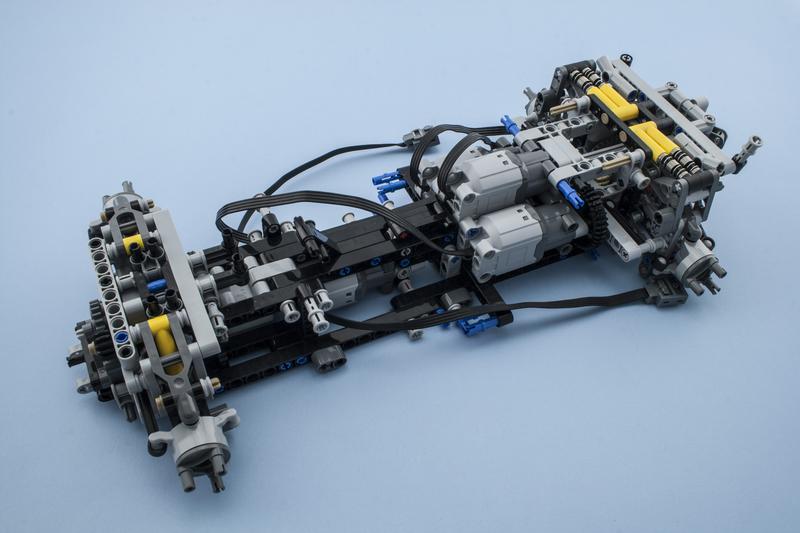 The seats are pretty mean looking. 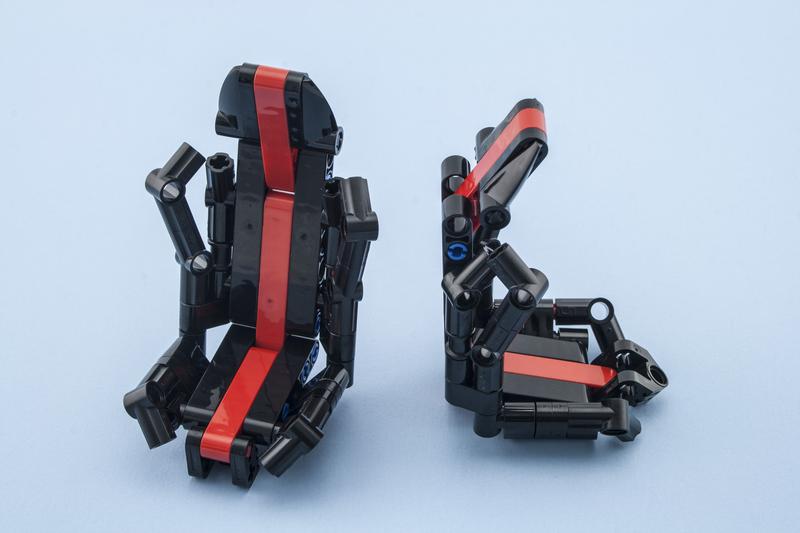 At this point, we have to wire up the SBricks. There are a lot of cables lying around, so it's important to keep them oriented similarly to the photos in the instructions. Otherwise, it's easy to connect them into the wrong place and make things very difficult when setting up the software. I had a couple of wires threaded through the wrong gap and they ended up too short, so had to back up a bit. 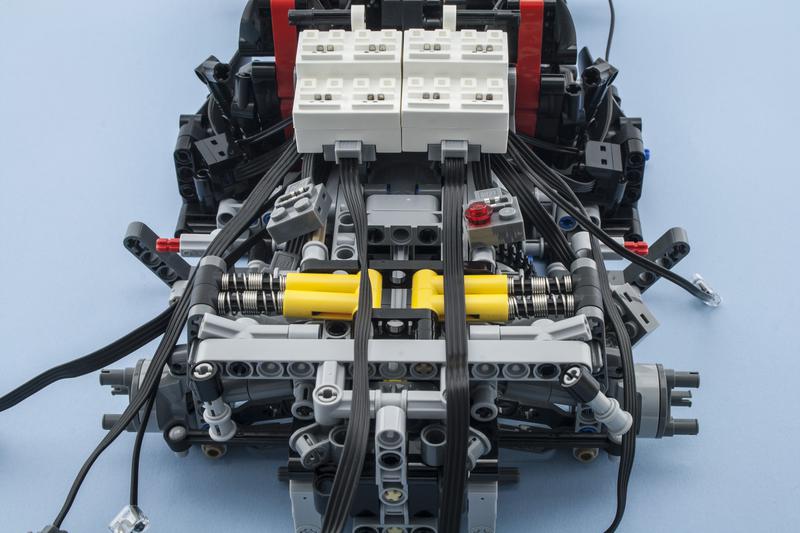 The instructions try to make it simple to connect things up, but it still took me a couple of goes to get it working properly. I've overlaid the image from the instructions below with the functionality of each connector in case it helps someone else too. 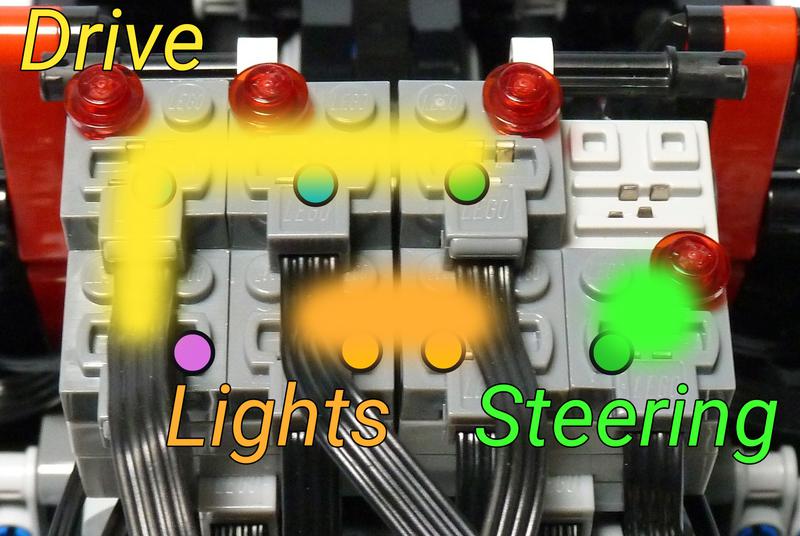 You should test the SBrick connectivity here to make sure everything is correct. This was my first time using the SBrick software, and I found it a bit confusing.

First, setup a new Creation for the Icarus, and choose a Controller from the public market. They all seemed to be freely available, but maybe that won't be the case in the future? I chose the ugly looking "Hand drawn driving controls" because that's what Madoca used in his photo instructions. But I'm sure you can choose from one of the other better looking ones that include steering/acceleration and lighting (not all of them do). 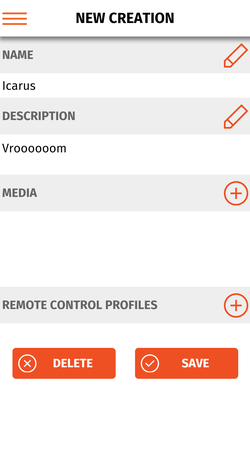 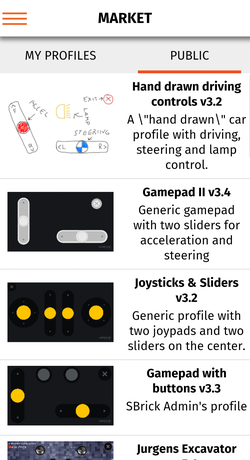 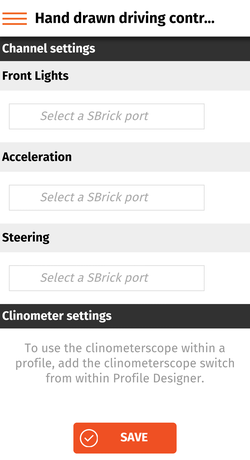 Next, you need to link the SBrick ports to the appropriate function on the controller. You can test each port to verify what it does on the Icarus. Note however, that the drive motors will not work if you only test them one at a time as they are fighting against the other three motors which are turned off. It helps to only connect one thing at a time in that case. A further complication is that two of the motors needed to use the inverse direction. I was also experiencing strange behaviour with port C as a motor seemed to be leaking current into port D for lights as both would turn on together.

My final configuration is below. 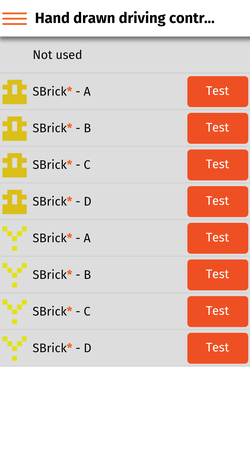 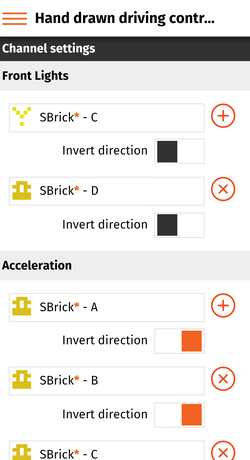 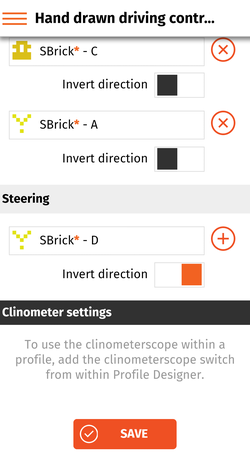 Now, the bulk of the car is done and working, it's time to pretty things up.

The panels are all very angular and tricky. You typically build some odd-looking contraption and then it's mirror image (usually with far fewer steps so there is lots of mental symmetry calculations happening). These are then added to the main body via some obscure pin/axle connection that was setup a hundred steps ago. 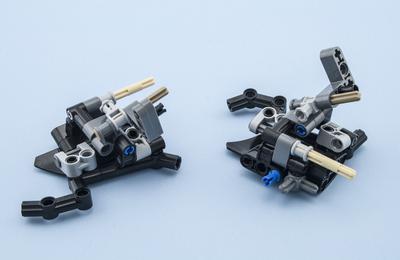 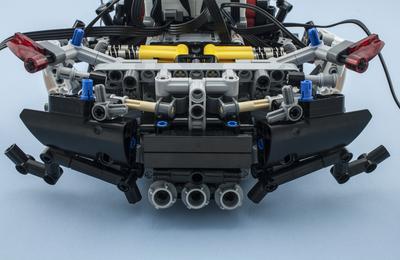 I found some of these panels to be hanging on fairly loosly though, and you need to be careful how you pick up the car for fear of breaking things. 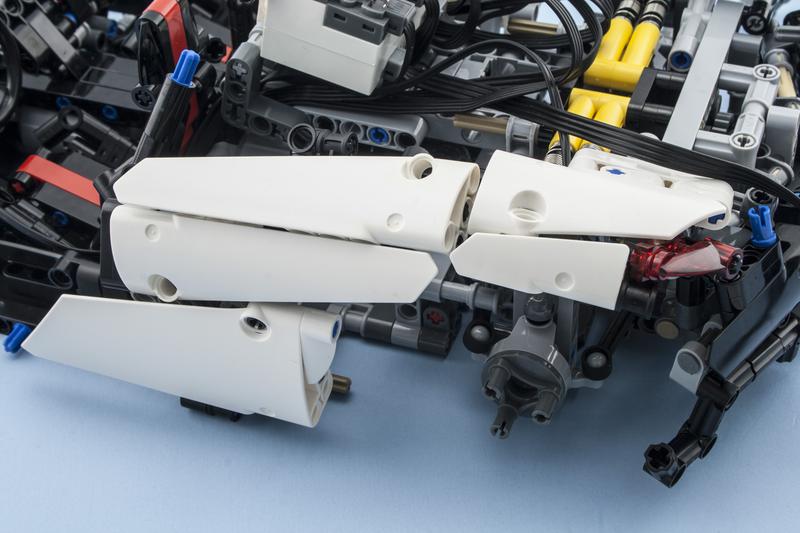 There are a LOT of angular connectors used, and to great effect. 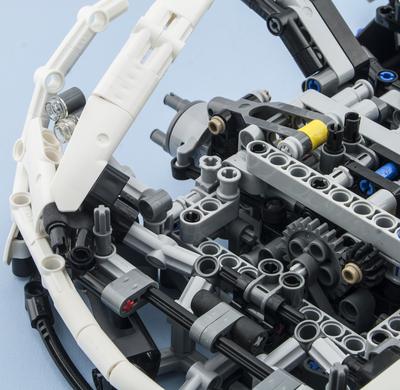 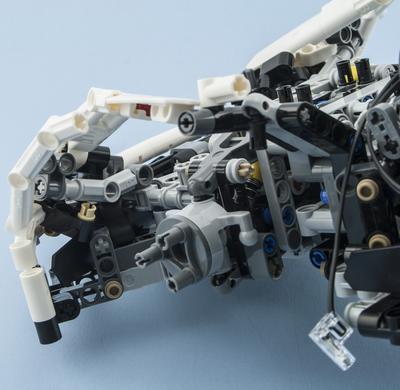 The 2 power packs fit snugly in the gaps next to the SBricks and are easily accessible. 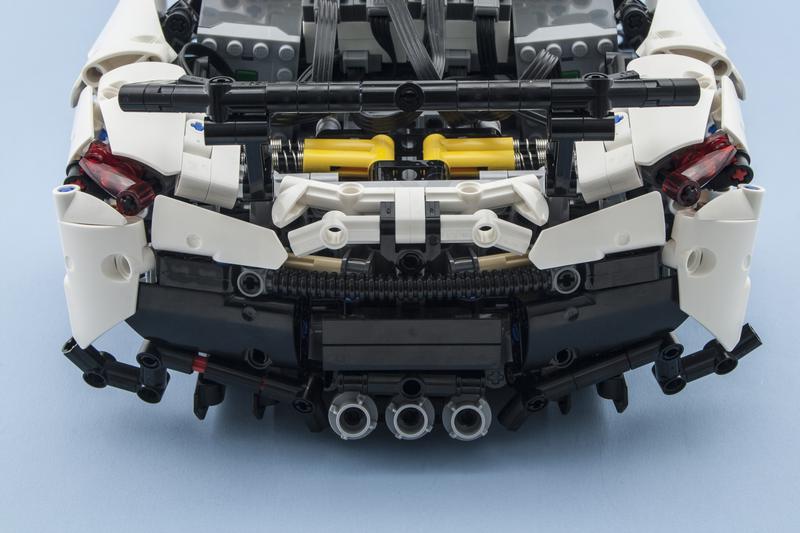 My 2 SBricks didn't quite sit flush as you can see below, which sometimes prevented the boot flap from closing without a little extra force. 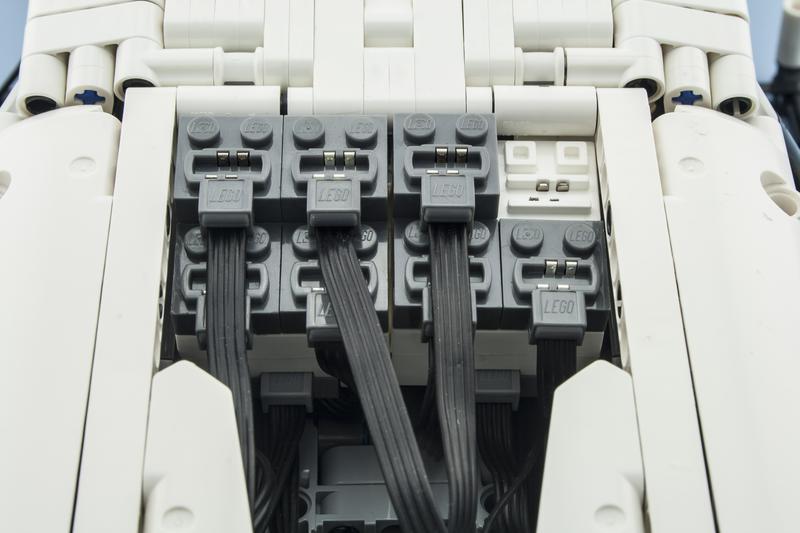 The beams that make up the front window use pin connectors. They look great when lined up properly, but after handling the car a bit the flexible axles they are threaded through easily pop out. 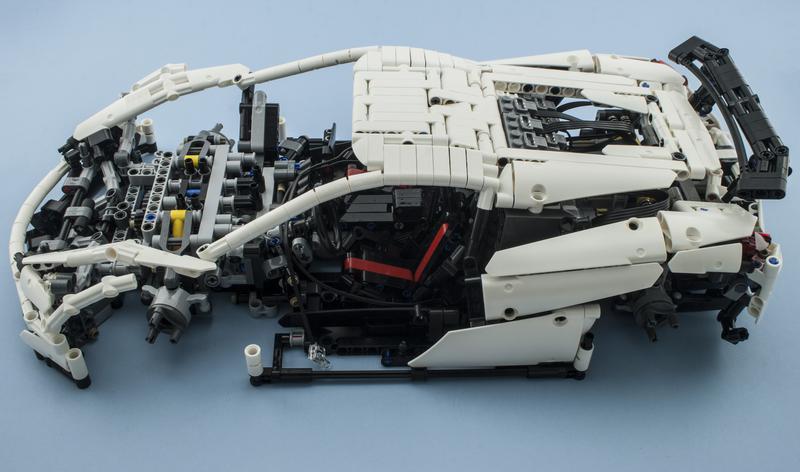 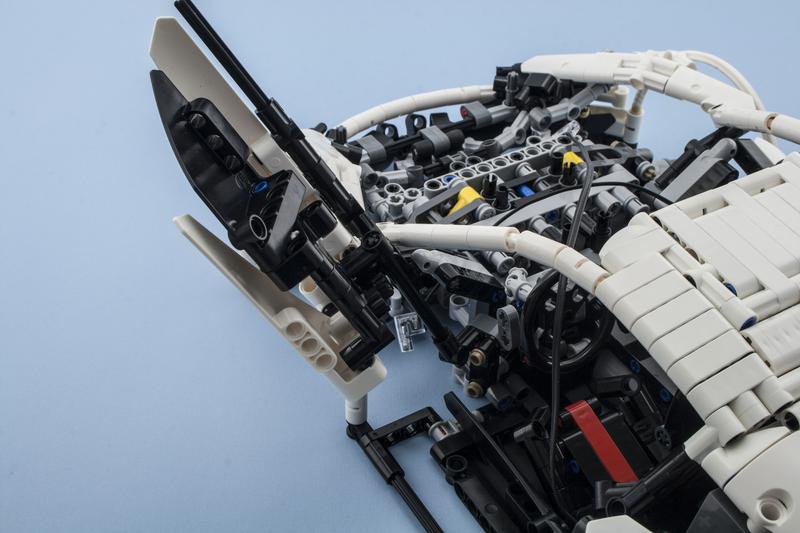 Finally, the bonnet and wheels are added, and the Icarus is completed! 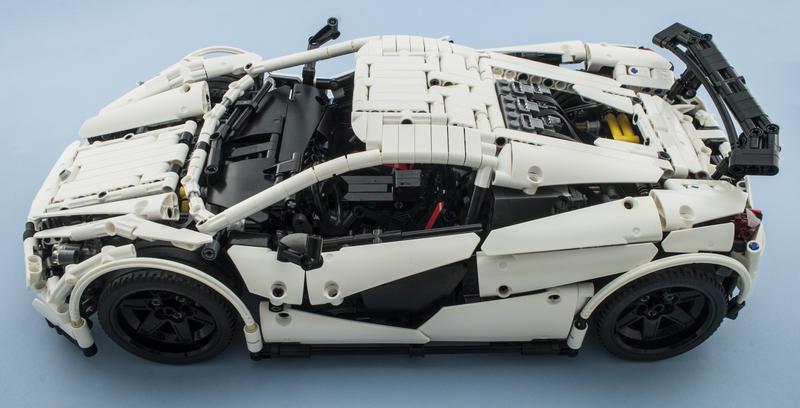 The blue lights in the back are coming from the SBricks. 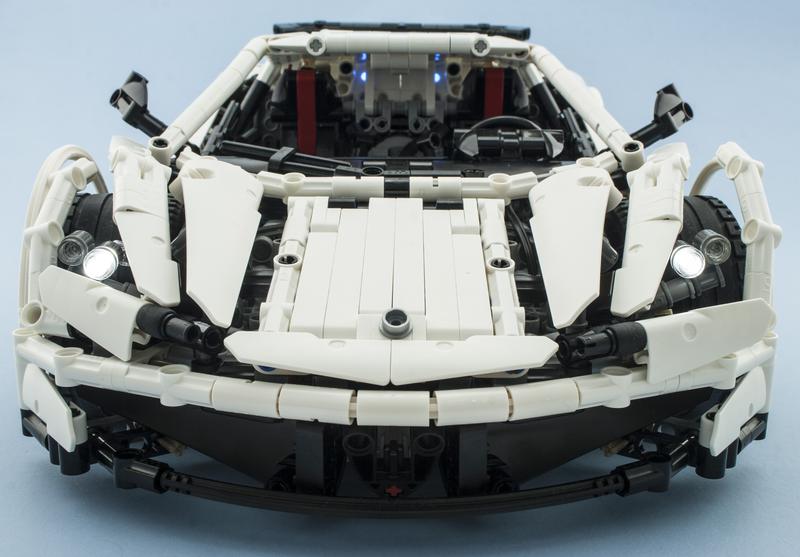 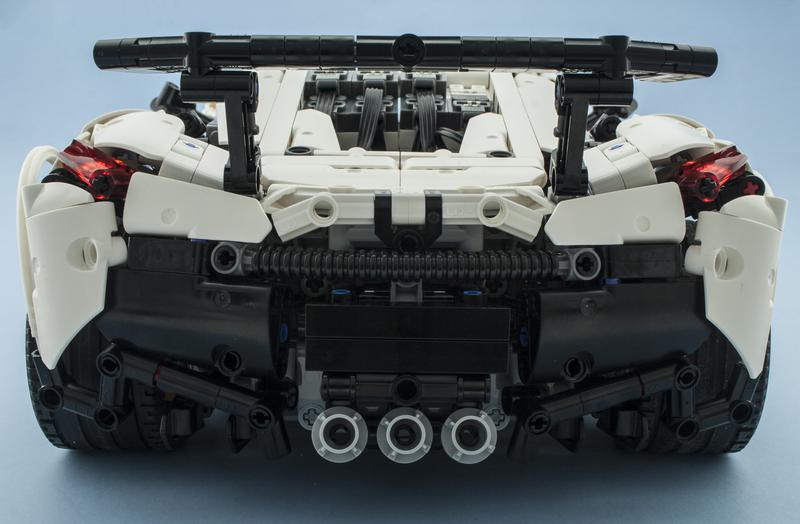 At the end of the build, I had several parts left over and was short several parts. I'm sure this came down to me using the wrong ones - especially using the wrong angled connector in several places, only some of which I picked up on and corrected. So you need to pay close attention to the instructions. Luckily it was only for parts that I had plenty of extras for.

There are 2 SBricks required. I bought the SBrick Plus ones (because why not) in the 2-in-1 pack. I was very interested to see how well and easy they work, and especially wanted to try them out with external programming software like Scratch which my kids use at school.

I used the official SBrick app by Vengit on my phone, although I believe there are other ones out there.

After some initial struggling to get the controller setup, I was left with one major problem that I just could not figure out (and still haven't at time of writing). After powering up and opening the SBrick app, the steering would turn full left. Steering the car via the app would only move between the full-left and middle positions. Turning the car off and then on again would sometimes get it to reset back to the center position, but then it would turn left again as soon as the SBrick app was turned on.

I even resorted to tearing half the car apart in case the servo axle wasn't centered when I inserted it, but to no avail. I have no idea what is wrong, or what part is to blame.

I mentioned one of the reasons I wanted to buy the SBricks was to try using them from the Scratch environment. First, I tried the Chrome plugin S2Bot 4 Scratch which turned out didn't support the SBrick Plus. I just tried again with upgrded v0.8 that apparently does support the Plus, but it still doesn't seem to find it. Perhaps it doesn't like my bluetooth adapter. Frustrating.

Next I tried a Windows 10 driver that also didn't work. Apparently it only works for "new" Windows 10 installs and not ones upgraded from previous versions (really??). It just continuously tries to pair devices, when it occasionally connects it immediately disconnects again. Frustrating.

Perhaps I should have just bought the cheaper SBricks (not the Plus). Maybe I'll try again in another few months.

This model is beautiful. It looks awesome, and is a great size - not so big it can't power itself along, but big enough to be impressive and draw plenty of attention to itself (it helps when I display it near my home's front entrance!).

Building from photographed steps was a challenge, but Madoca did a fantastic job at making them clear and unambiguous. Clearly, he put a lot of effort into them. It was a nice change from the hand-holding instructions in official LEGO sets.

Unfortunately, I haven't been able to do any decent driving with the Icarus due to my frustrating servo motor problem which I've yet to figure out. But, it drives very well in circles and into walls :) I haven't completely given up on it yet and perhaps someone here has seen the problem and can suggest a fix for me :D 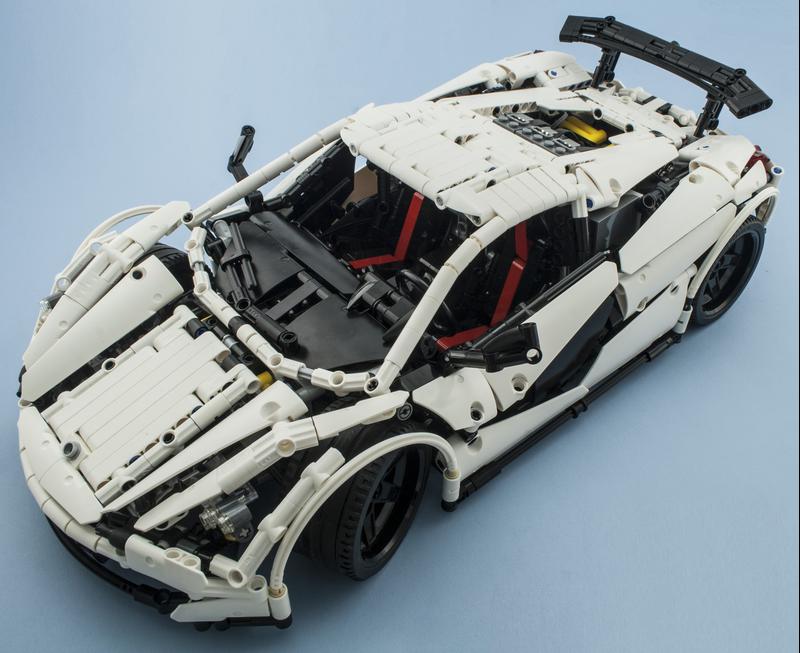