Lego Sea Creatures - The Good, The Bad, & The Ugly

Summer is here, for most people that means Sun, Sea, and Se....Sea Creatures! 44 years ago to the day (June 20th) Jaws was released. The movie that changed the industry and created the Summer Blockbuster also tarnished the reputation of a whole species for generations. Jaws inspired me to write this but as I researched it I came across a whole host of great Sea Creature sets that weren't limited to sharks so I expanded the list.

This is not a comprehensive list, nor a serious critique of peoples hard work, just a light-hearted look at LEGO's past, present and future. I have "trawled" through the decades to "dive" to the bottom of the issue on everyone's lips. Which LEGO Sea Creatures are Good, Bad, or Ugly?

I feel the need to point out how most of the Good are from more recent sets. This just shows how far Lego have come. They are capable of designing such better models thanks to new parts and new techniques.

The first Good is a small little polybag (See Simon’s history of polybags here for a good read). Set 30476-1 Turtle is a really nice build and looks great. The head may be a little disproportionate but it doesn't look odd. 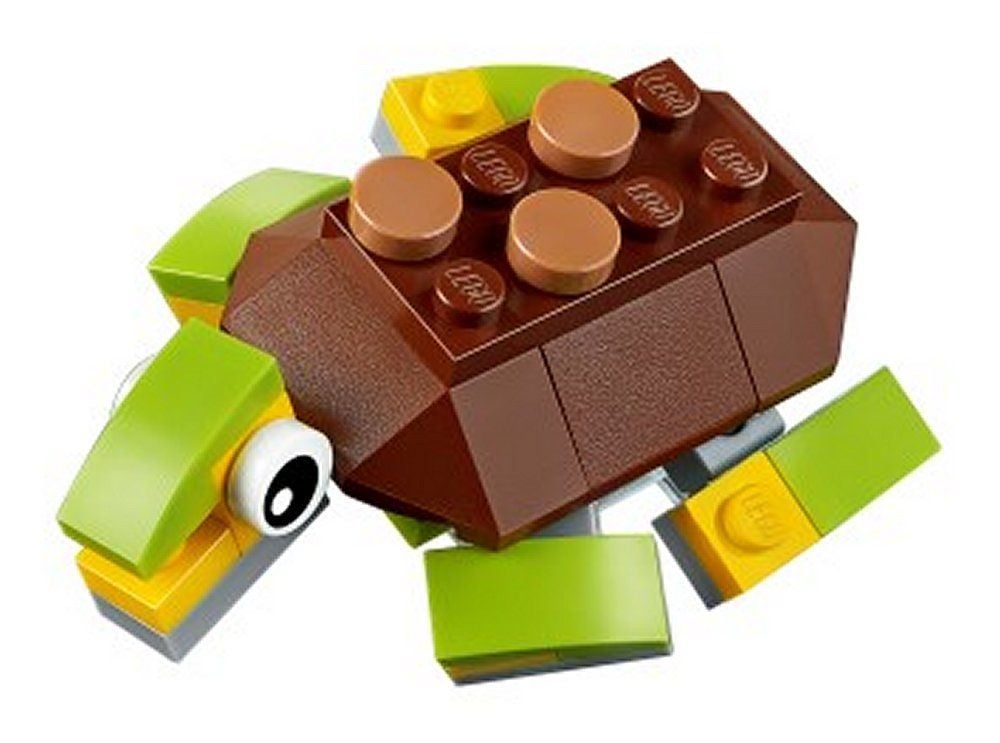 Next is from LEGO's new theme Forma. Now I could've included all the skins but that seemed derivative. Instead I chose my favorite Set 81001-1, JAWS!
Forma is the fruition of a new approach for LEGO, crowd-sourcing. Getting its chance to shine on Indiegogo, LEGO launched their campaign on September 27th, 2018 and it was immediately popular. Ending on November 6th not just fully funded, it achieved 1334% of its target. Now these sets haven't yet been released wider than the campaign so getting one isn't cheap (and it certainly won't get cheaper than the $15 price tag for backers). The "Skin" design allows for perfect detailing and the frame allows for perfect movement, something hard to achieve with LEGO. 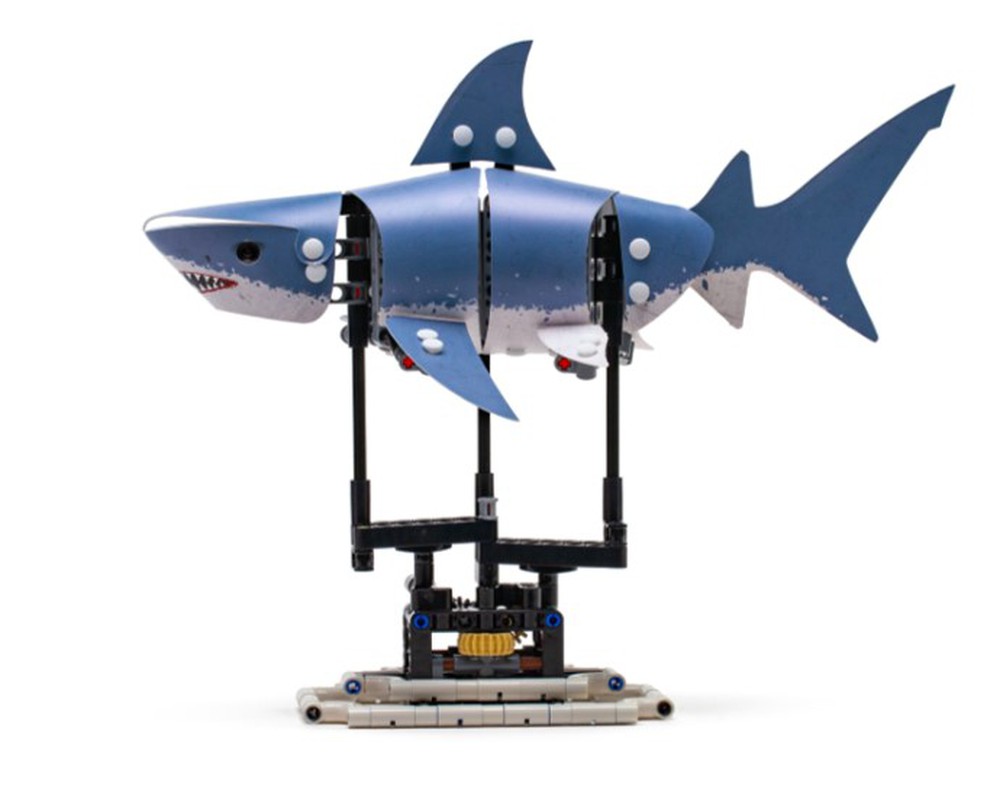 A recently released set that I couldn't resist is set 41373-1 Funny Octopus Ride. This Friends set is part of the Pier Amusement Park sub-theme encompassing several summer 2019 releases. Now you could complain to me that these are not really models of sea creatures and you'd be right, but just look at how cute those little models are! I would never believe you if you told me they didn't make you smile. So, here for your pleasure, the sea creatures of the Friends world. 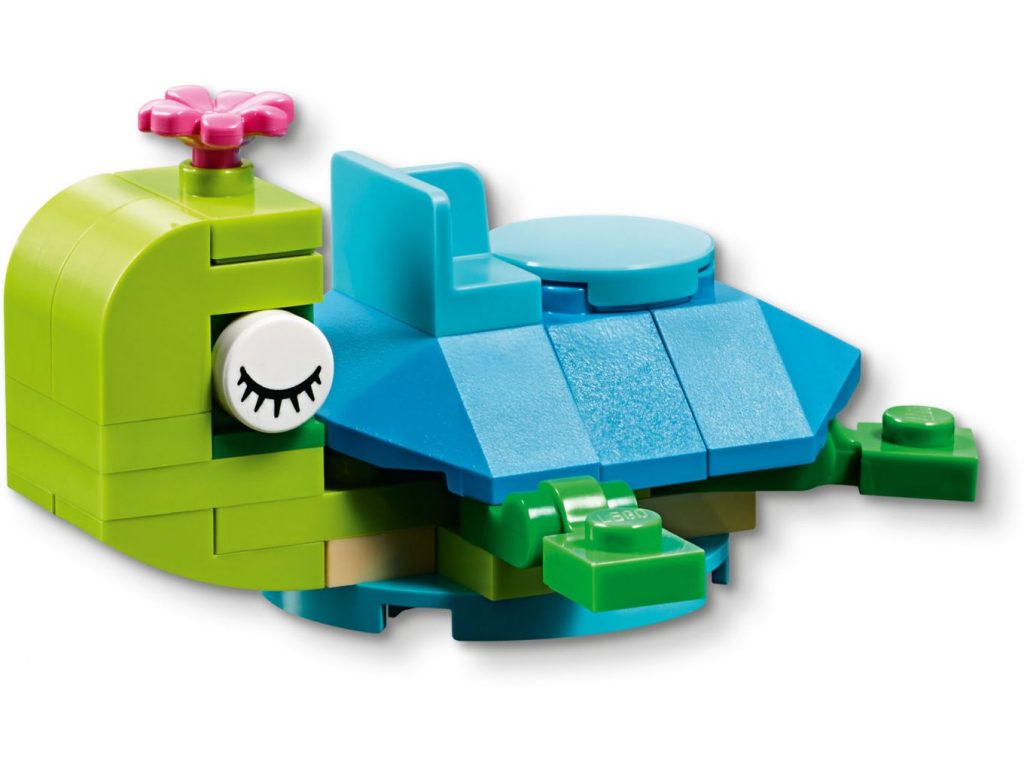 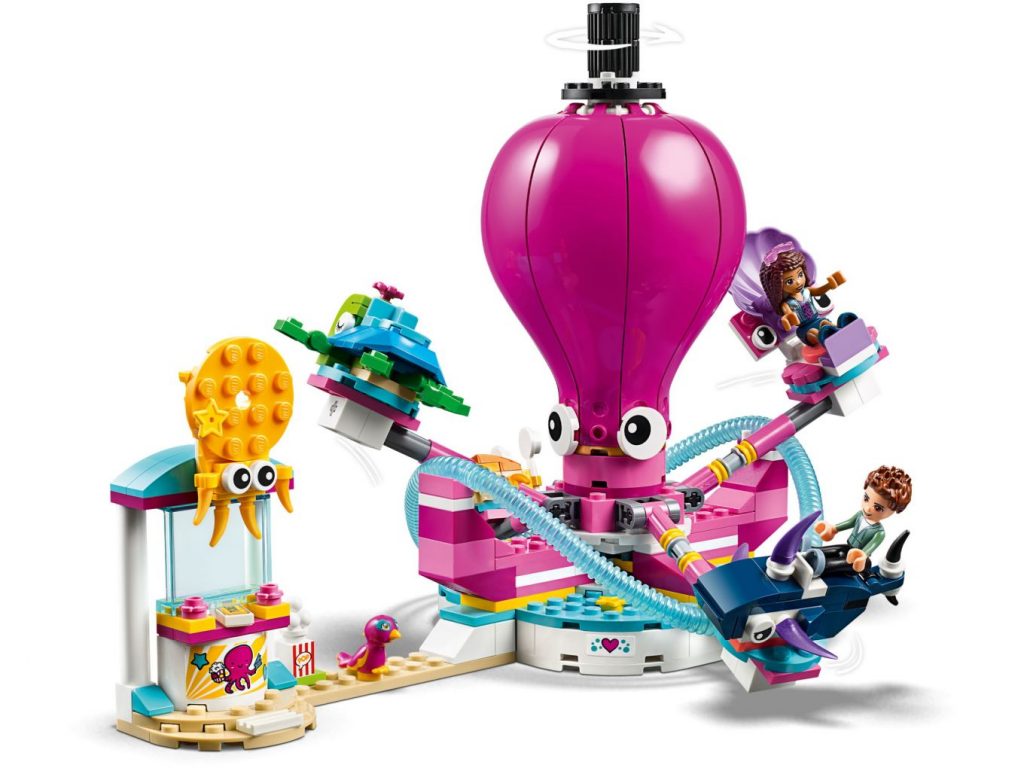 An obvious choice for Good is 2019's Set 31088-1 Deep Sea Creatures. This is a 3 in 1 Creator set. The three models can be built individually from the sets contents. Not only does it come with the best shark Lego have ever made, it also has an awesome squid, angler fish, and crab. The shark definitely brings back all those fears of that menacing creature. Its dead eyes, its powerful nose. It's fantastic. Then the crab, pincers, legs, the scale, all look great. The set keeps giving with two awesome b models that look anatomically correct and great fun to play with (Also check out the official 4th model, a Whale) 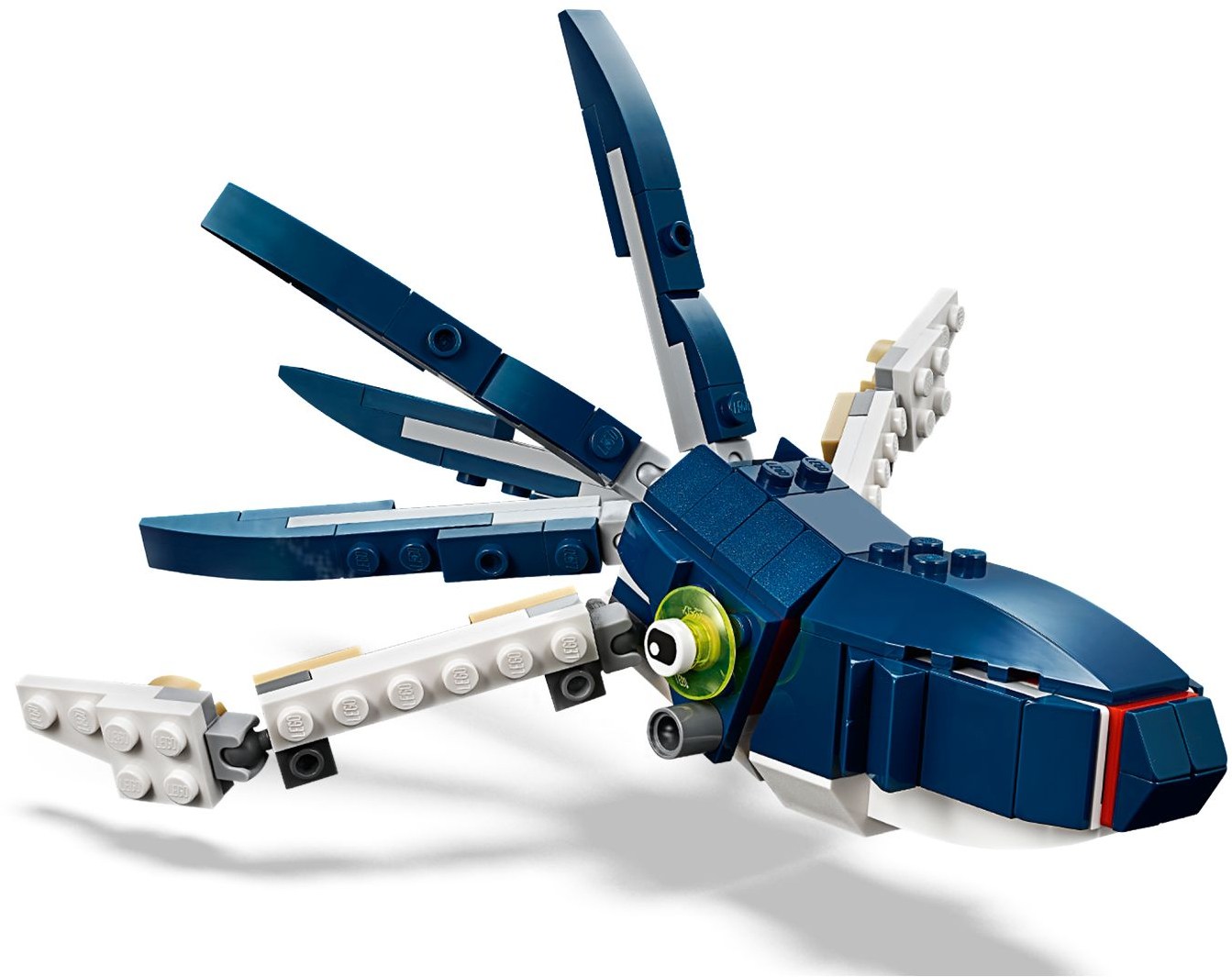 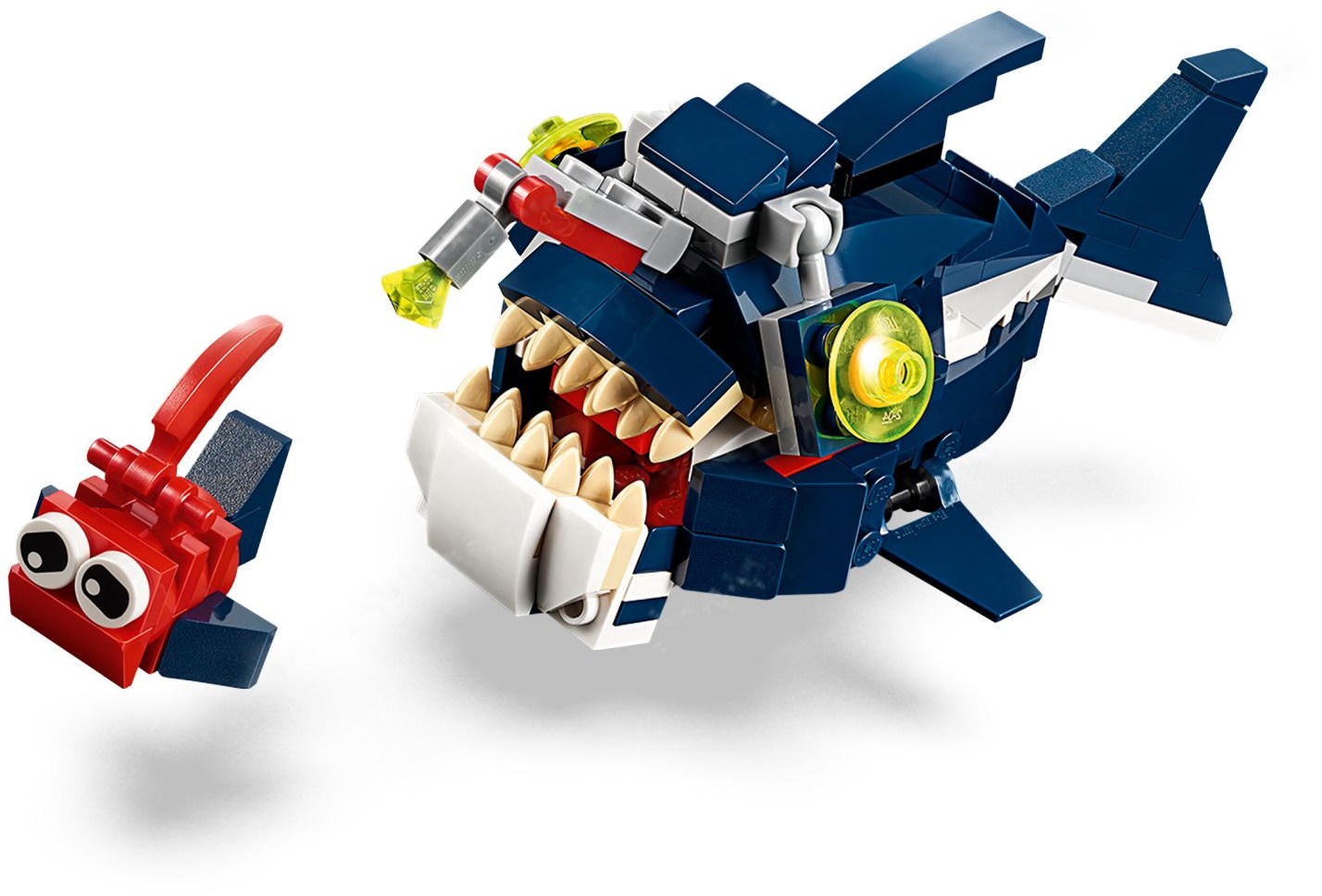 Last of the good is Set 4506-1 Deep Sea Predators, a Designer Set. Just like set 31088-1, this set includes a shark, a squid, and an angler fish. The difference being you can build them all at the same time. The shark looks great (if not a little angular). But I think the best model in the set is the squid. It's nimble tentacles and bulbous eyes give a real sense of how alien these creatures can seem. The angler fish however could easily be in the ugly list. It's barely recognizeable. This set has another great thing going for it. It contains parts 4589 Cone without groove, 49668 Plate Special 1x1 with Tooth, and 2412b Tile Special 1x2 Grille. What's special about them? They glow in the dark. As a glow in the dark part, 4589 only appears in this set but does appear with a groove in 3 other sets. 49668 appears in 1 other set and 2412b only appears in this set. 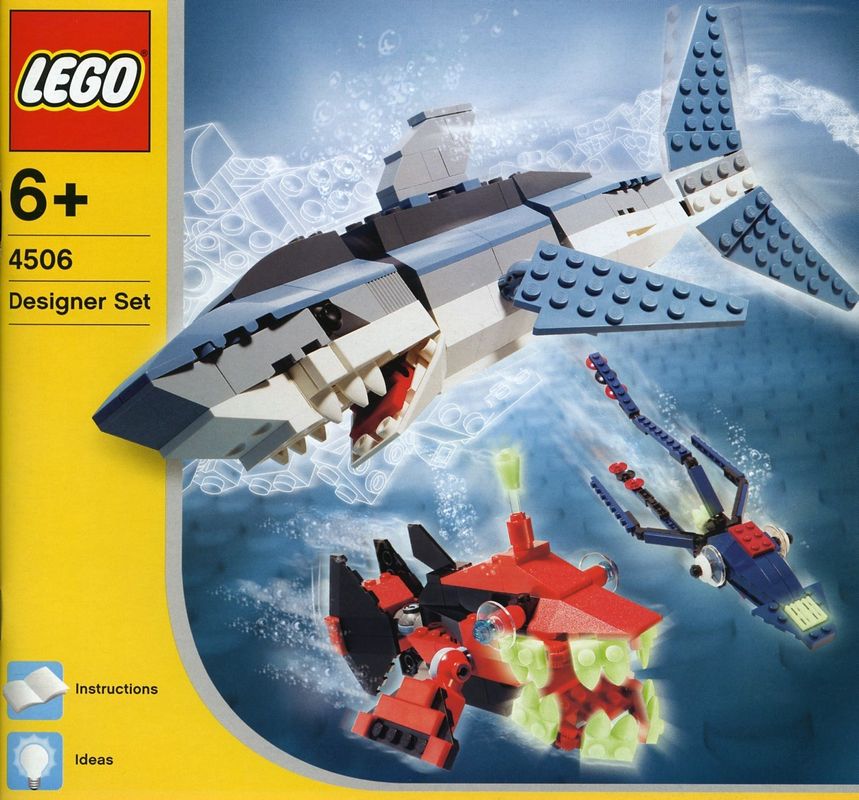 I know I said that was the last good set but this little dude wanted to say hello. 71011-13 Shark Suit Guy.

These are all smaller sets. Either Monthly Mini Model Builds (MMMB's) or polybags. It can seem harsh to call MMMB's bad as they are free and simple builds. But then I'd have no concept for my post so here goes.

This turtle (Set 40063-1) initially looks ok, its head and legs look great. Take a second longer and you notice how badly executed the shell is. They tried to add texture with the lime angled plates but I really don't think it helps. It looks like they put a superhero cape on his back. 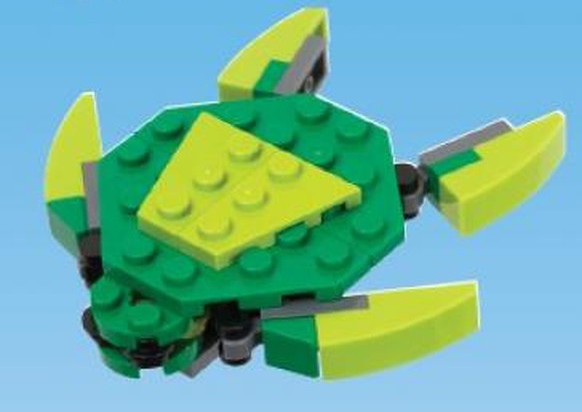 They called Set 7608-1 a Dolphin, but you'd be hard pressed to figure it out. It's mis-matched colors, odd tail and nose, and strange choice of curved brick on the head all add up to... well I don't know, a jet ski? Big miss. Were Lego just trying to get rid of some leftover parts?

The last Bad Set is 40067-1 MMMB Crab. This suffers from a similar problem to the Turtle, flat back. But it also has some really weird legs (298c02 Lever with Black Base) that just don't look right, and pincers that don't pince (is that a word?). 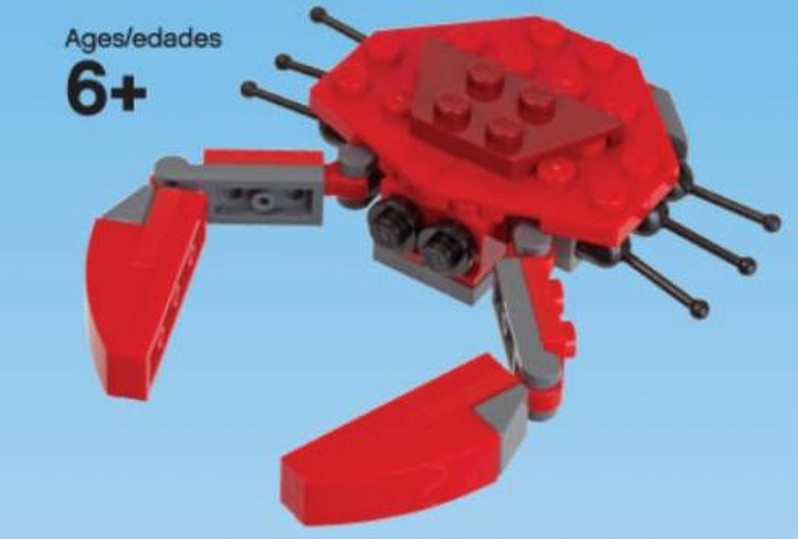 Ugly is my favorite category. Bad but I can't help but love them, like a son doing time for petty theft.

Kicking off Ugly is that pesky Jaws again. Set 7805-1 Shark. A Creator polybag that was a promotional give-away at Shop at Home. The moving tail and jaw are a nice touch, but the fins too thick, and the weird overhanging slopes give this shark a sort of Beatles haircut look that's just ugly. 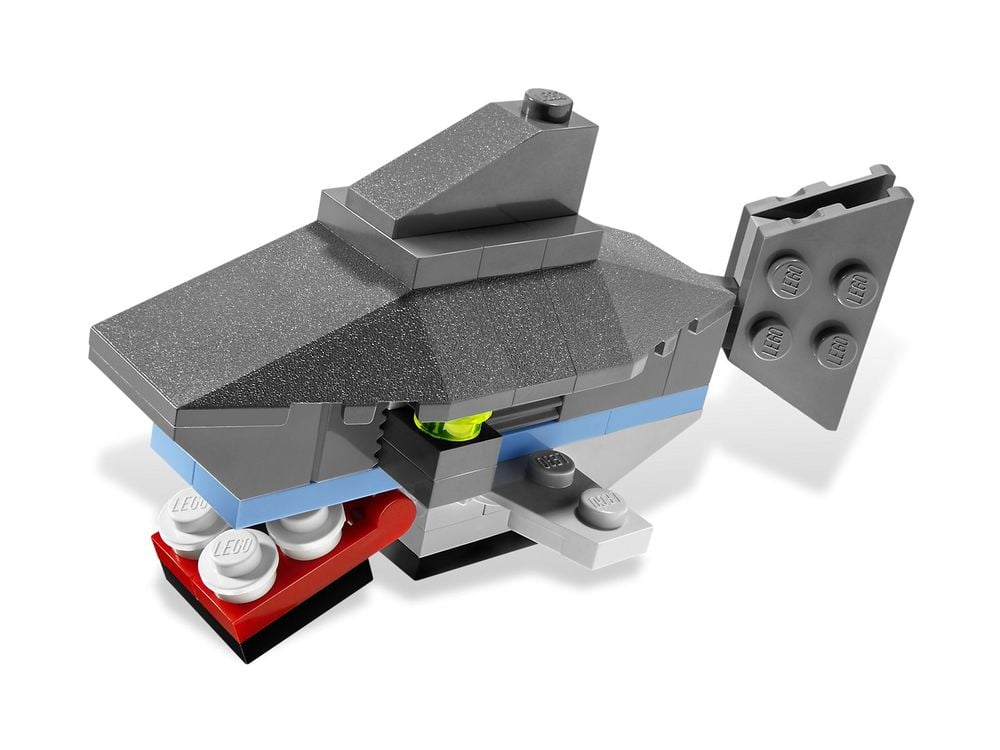 This next Ugly fellow is truly that, even in real life. Set 40135-1 MMMB Angler Fish has a crazy under-bite, a rigid lantern, a vine tail, and bat wings. Yet you immediately get what it is, a Frankenstein Angler Fish, right? Don't listen to what the meanies say Frankie, you're ugliness is awesome. 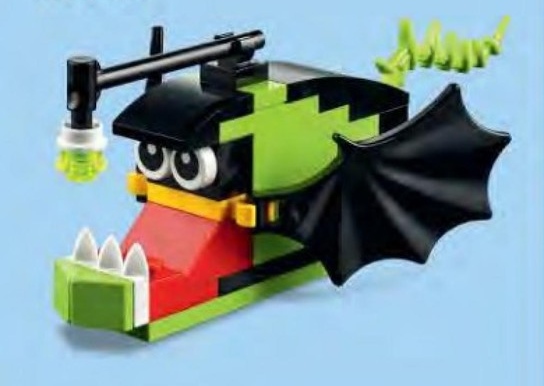 And finally, Set 31031-1 Rainforest Animals (See our original review of this set here). I know what you're thinking, how is a Sea Creature in a set called Rainforest Animals? Answer, I don't know. I guess there are rivers in rainforests, and aquatic creatures live there, but you don't really expect a fish if you've been told rainforest animal. So with that in mind, our model here is already a bit of an outcast in his box. Add that to his randomly red and blue fins, and his gormless eyes and mouth, he just about passes for a fish. However, there's a lot of nice build techniques to this model, which lifted it out of the Bad and into the Ugly. 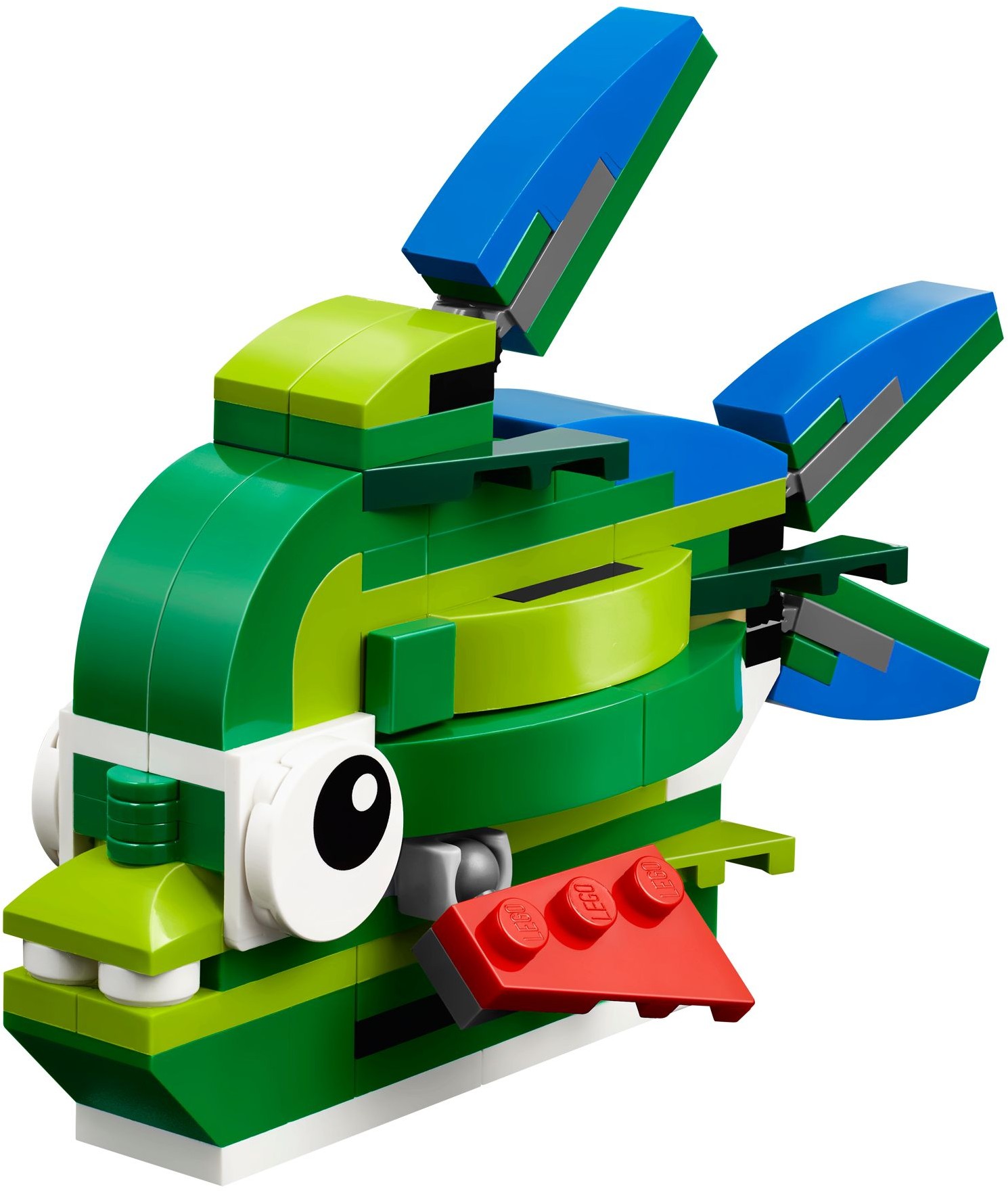 LEGO have a lot of parts that really lend themselves to be used in interesting ways to bring sea creatures to life. MOC designers have pushed this even further. Here's a couple honorable mentions of some MOCs in our database, no good, bad, or ugly, just a solid pat on the back.

First up MOC-24591 Dory & Nemo's Aquarium, designed by IScreamClone. A whole host of sea creatures in this one. The highlight, that starfish, called Peach in the movie, clinging to the glass. But with details like the wavy vines, and did you spot the sea snail? This MOC is a great example of how to create an immersive model. 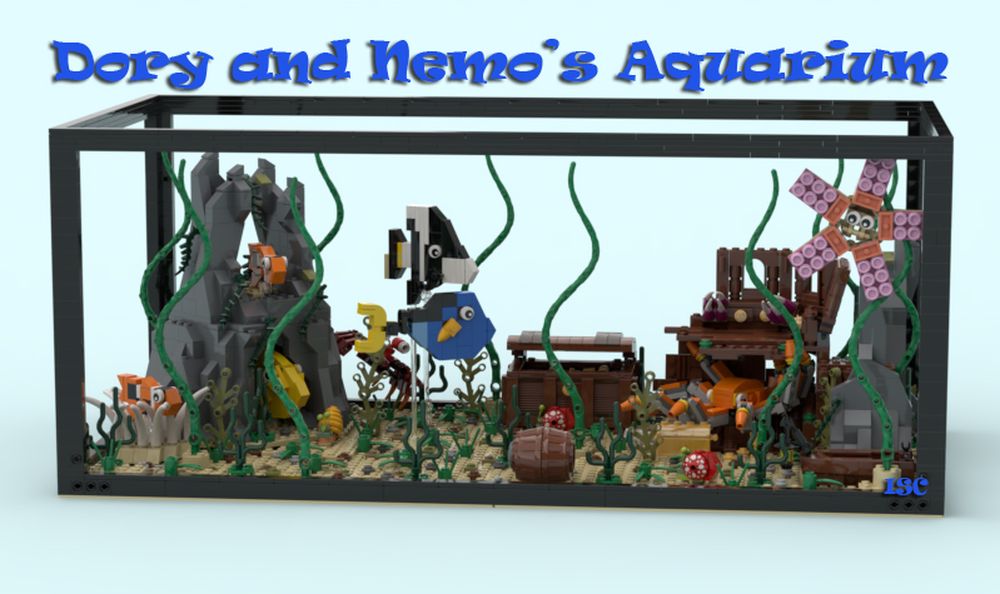 Next is a tutorial. MOC-17047 How to Build a Shark by Designer Totobricks provides a step by step video on how to make a shark. Not just a basic shark either, this shark is well designed and as one commenter said its vicious looking (put some angry eyes on this beast and you've really got a terrifying shark). 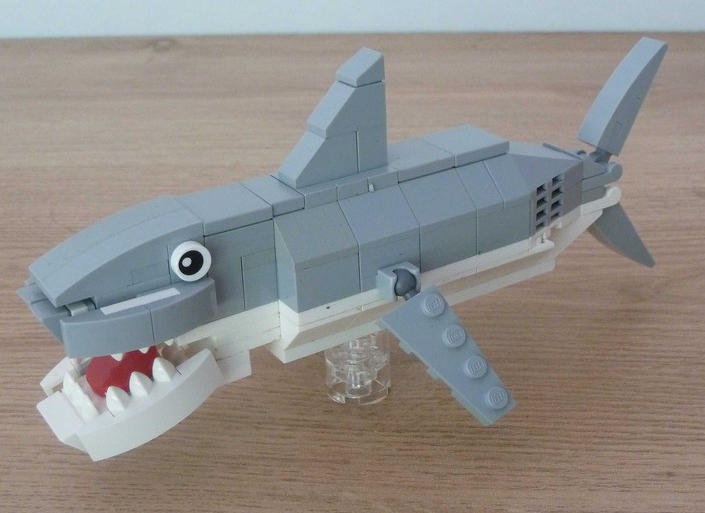 What makes MOC-1868 Killer Whale (by Designer Tomik) special is how well this alternate build of Set 31021-1 is. That set is Furry Creatures and allows you to build a Cat, Dog, and Rabbit. He has taken these parts and created a fantastic looking Orca. It just shows what you can achieve with a smaller, versatile set. 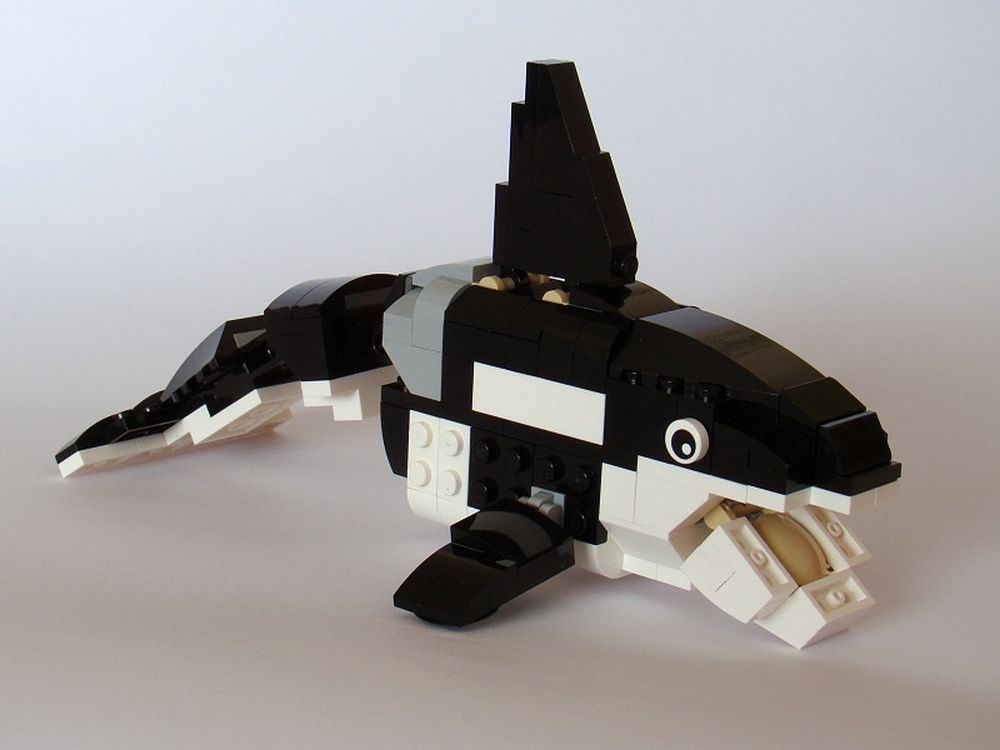 The last one is from prolific designer JKBrickworks. Most know him for his successful Lego Ideas Sets 21315-1 Popup Book, and 21305-1 Maze. He's one of the best at creating moving models and his MOC-22369 Swimming Shark Stand doesn't disappoint. He's created a perfect way to display that lurking menace, adding realistic motion that adds the wow factor. Check out the video on the MOCs page. 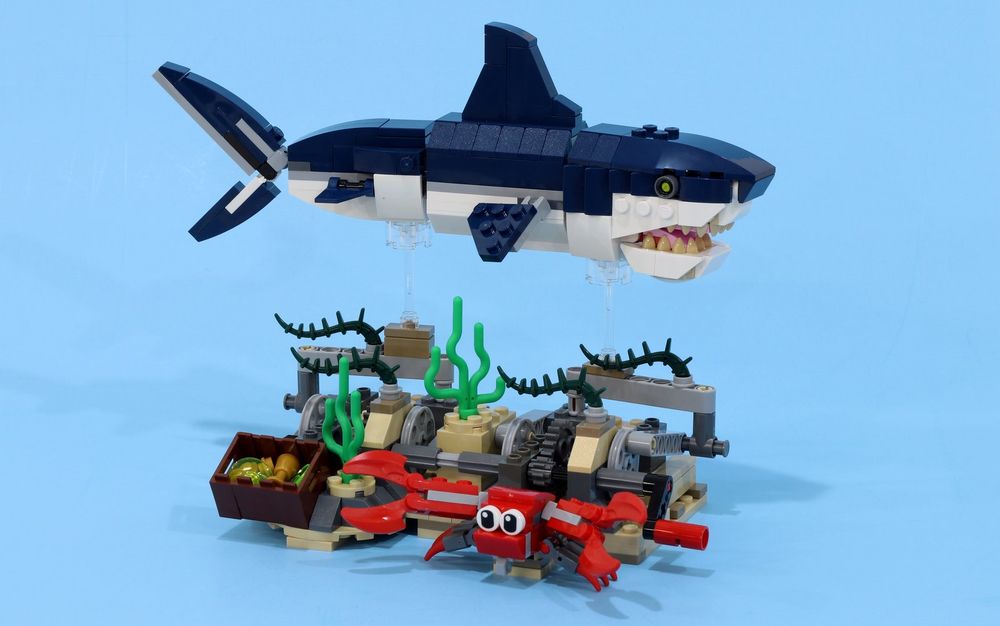 So this summer, when you're paddling around in the water and you feel like someone's watching you, remember it could be a LEGO Shark!

I am a poor LEGO fan who loves nothing better than to find a big, cheap, bin of LEGO and see what I get. I'm a Brit living in California so my spelling frequently differs betwen English and American English (sorry about that!). Sorting is my expert skill, creating MOC's is not. So I'm always grateful to this community who create things for me to build.

Credit for that awesome LEGO Jaws Banner Image goes to fellow Administrator, Simon. Show him you love it in the comments.

To read the other The Good, The Bad, & The Ugly post on LEGO Christmas Trees Click Here.