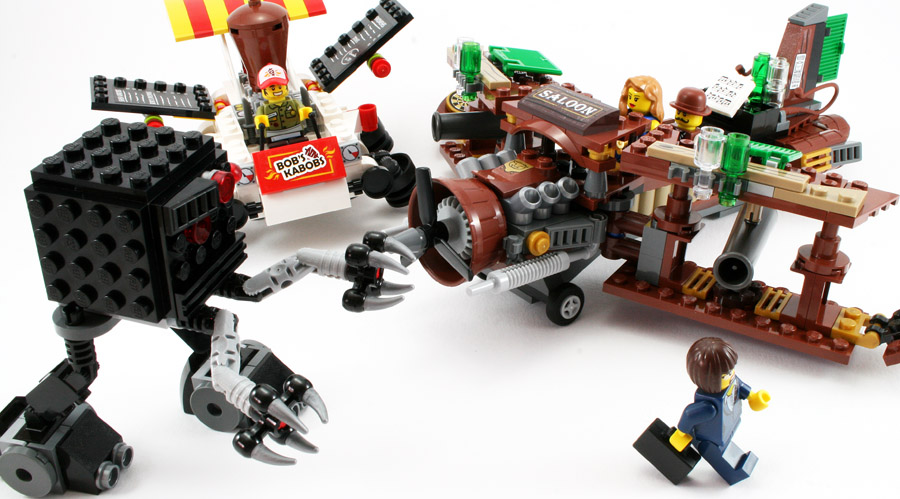 This is another of the object-transformed-into-flying-thing against an evil black Micro Manager robot who is picking on an innocent bystander. In this case, there are actually two good-guy vehicles, a great looking western themed biplane and a flying kebab shop.

Inside the box we have:

There are 473 parts in this set, as shown in the full inventory.

There are four minifigs in this set: Sudds Backwash, Rootbeer Belle, Kabob Bob and Executive Ellen, who has two faces which has been quite common amongst the Movie sets. These are all very contrasting characters! I believe the Bowler Hat is new in Reddish Brown, and there's a new print for the Baseball Cap. Book #1 uses Bags #1 to build the Micro Manager and Bag #2 to build the Bob's Kabob flyer. The robot is similar to the one in 70807 MetalBeard's Duel, but is smaller. The legs have two joints and can each turn a full circle. Similarly with the arms. There are no fold-out parts on this robot unlike the previously built ones, but it does have a permanently side mounted flick missile. There is also a clip on its back to hold something that isn't shown anywhere. Perhaps a spare missile if you want to make one.

The Bob's Kabob flyer is next. Some poor guy's Kebab shop has been turned into a flying death machine. No it doesn't force you to eat the kebab meat, that would be a too cruel and drawn out death. It flings what appear to be condiment missiles instead. It's a small build with a rotating meat stick and adjustable rocket nozzles. Somehow every time I tried to shoot a missile I'd end up ripping the entire wing off though.

To me the most interesting build was definitely the biplane, which is done in Book #2. It is made out of parts from a Western Saloon, which gives it a bit of a steampunk feel. Although it has two great big canons on the wings... I have no idea what a Saloon would be doing with canons.

The front engine looks great, and uses exhausts as machine guns. The rear has two treasure chests which contain dynamite, presumably to be used as bombs. It also has a couple of barrels with trans-red cones which look like jet engine exhausts. A bit strange on a biplane! The wings look great, but are quite weak. I was continually having to squish the parts back together. The ammo for the canons are mounted behind the piano (what biplane would be complete without one!), however I recommend using the trans-green ones instead of the trans-clear so that you don't lose them after firing! There is standing room only for the minifigs, and a special raised platform for Rootbeer Belle for some reason. Unfortunately this means any normal minifigures need to stand well back and are quite a bit shorter. The bi-wing plane really stood out for me in this set. It looks great and when combined with the other robot/flyer models can have some great play. There are four new minifigures, whereas most of the other Movie sets this size have three or less.

This set is now available for sale for USD $39.99 via Amazon, eBay, LEGO Shop, or check the country specific links on the set's details page. Note that Rebrickable earns a small commission on any purchases made via these links, and we appreciate it when you do :) 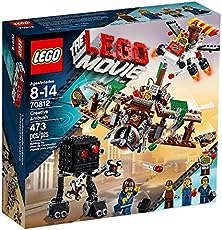 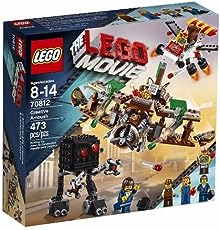 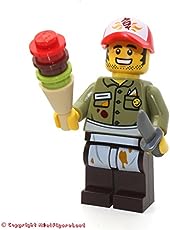 The LEGO Movie MiniFigure - Kebab Bob (From Set 70812) Kabob
$8.95
Bestseller
DEAL OF THE DAY
ENDS IN
Ads by Amazon