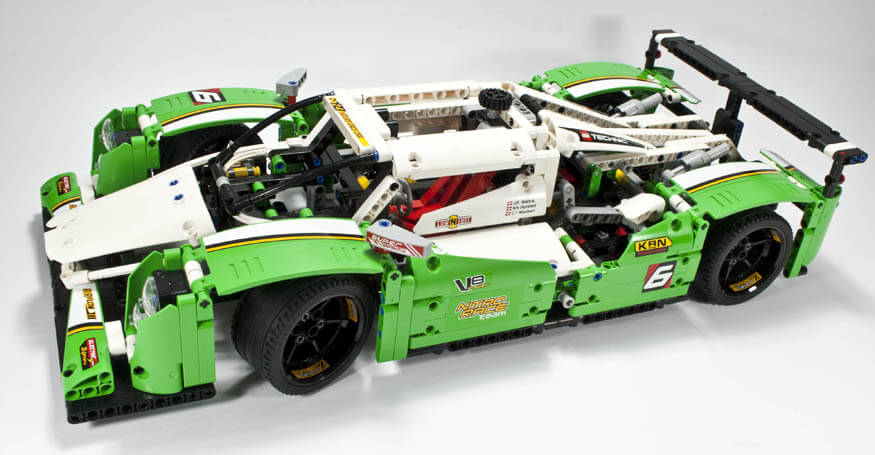 I was able to get my hands on this 2015 Technic flagship set (thanks to Kim from the LEGO CEE team!) for review. It does not have as many parts as previous flagship models, but is still a huge set.

See the full inventory of 1177 parts.

Like the Detective's Office, the building instructions in 42039 come in a single bound book. There are 254 pages. The below photo was taken after finishing the build, the front page is a little bent but otherwise it's still in good condition.

As a large new Technic set, there is the usual assortment of new parts and colors to be found in this set.

So plenty of new Bright Green parts in this set, although I'm not too sure how popular that color will be with Technic builds.

The build starts with the rear axle. The V8 engine is at the rear which can be seen in the completed build when the rear end gets raised via the manual wheel or optional power functions. I still think the V8 engine design is getting dated and boring, it would be nice to see something a little different one day. Then the front axle is built up along with the internal framework. Pretty quickly, you get a feel for the true size of this car. By this stage, the majority of the framework is actually complete.

Compared to other large super cars (eg 8070), this one is pretty light on the internal framework. It has a LOT of panels to make up the body though.

The new curved panels are used here as the wheel arches, which I guess will end up being their main use. But I'm sure there are plenty of creative MOCers out there that can come up with something else. The last few pages in the instructions show you how to use the Power Functions accessory pack to modify it. All they do is motorise the raising/lowering of the gull wing doors and rear cover, plus add some lights to the front. While nice, I'm pretty sure most people want to see the car actually drive!

It seems pretty standard for Technic sets to contain a lot of stickers. With this car being a sponsored racing car, it's obviously going to have quite a lot of them.

However, stickers also reduce the reuse-ability of your parts - especially all these nice new panels. For this reason, a lot of AFOLs never apply stickers. For this build I decided to leave them off until the very end so I could compare the completed model with and without stickers. What do you think? With or without stickers? By the way, the stickers on the inside rims of the tyres are a pain to apply. I had real trouble getting them lined up nicely.

This Racing Car looks great (except the side-on view, that just looks weird!), I'm not sure if it's supposed to be based on any specific model? I like that it has a very low clearance as a super car should. The suspension is hard but probably needs to be harder for something so low to the ground.

The internal framework is pretty minimal - instead relying on the 47 (!) panels to cover up the inside and make it look good. This works fine, and also helps keep the car lighter than you'd expect at 1.21 kg.

I think the stickers give it the character it needs to become a true racing car - without them, it's just a bright green expensive looking car. However keep in mind that 17 out of the 26 new bright green panels get covered in them! Not great if you want to use them for other projects.

The B-model is a racing truck, which kind of looks like a Hummer to me. From the single image on the box, it looks pretty neat and I will build it after I'm done with a few more reviews :)

For lots more photos taken during the review of this set see my Bricksafe page. This set is supposed to have been available from 1st January 2015 at LEGO Shop (US) for £99.99 but is currently out of stock, or you can keep an eye on other store's prices and sales history here.