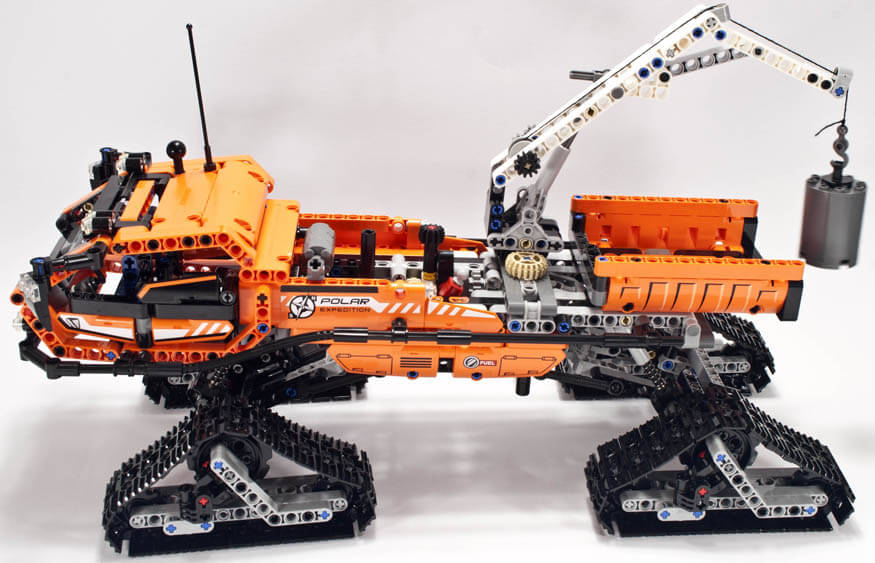 The 42038 Arctic Truck is the 2nd largest of the 2015 Technic sets released so far, at 912 parts. It is a strange looking truck, not something you would typically come across in your daily travels (unless perhaps, you work at the North Pole).

See the full inventory of 912 parts. I guess this set isn't worthy of the glued binding instructions seen in 42039 Race Car and 10246 Detective's Office. I assume LEGO are only doing that for the largest models.

The Arctic Truck is predominately Orange, so we get some new and rare parts in that color. Also, it makes use of the new 3L driving ring/clutch parts that are making their way into several 2015 sets. The build starts with the quite compact and seemingly complex gear box that sits in the center of the truck. The front and back tracked wheel assemblies are connected via two large ball joints (92910/92911) and four soft shock absorbers. The rear tipper tray is added, and uses a smaller linear actuator to move the tray on its hinge. The single gear lever switches the functions between this tipper tray and the crane arm added later. Then the remaining paneling is added as well as the front cabin. I guess this is a large ruck in real life as there is room for three seats side by side in the cabin. I applied the stickers last to see what it looked like with and without them. They help to break up all the orange, but I'm not sure they are really needed. Incidentally, adding stickers to a completed model can be a challenge :) My biggest gripe is that the steering is almost impossible to use. If you are not on a slippery flat surface, you simply cannot turn the tracks without lifting the truck off the ground.

The tipper tray seems too small for the rest of the model (although I presume it's based on a real truck). Plus, it's quite difficult to get the crane to actually drop anything in there or pick up from there as it's too close. So I guess it's just meant for activities outside the truck. As with with 42039 24 Hr Race Car, there are additional instruction steps to motorise the truck. However, all this does is control the crane arm up/down and the tipper tray. I'm still waiting to see the optional motorisation steps actually do something interesting like drive/steer the model. I guess they would need to release a new Power Functions set that includes a remote control before that could happen.

I found the build to be pretty interesting (more so than the 42039 Race Car), I guess because it is a bit unusual. However I must say, it's a really ugly truck :) I couldn't find any images of the type of truck this is supposed to be a model of, but I assume they are all about function over form. Searching for images of 'arctic truck with crane' gives more LEGO results than real trucks.

The B-Model is more like a traditional truck with tracked wheels, and looks pretty good to me.

Being a tracked vehicle, it's not very usable on flat surfaces. It works fine on carpet but is still hard to turn unless its moving at the same time. As for working in snow, you'd have to ask someone else. The last time it snowed near my home town was about 20 years before I was born :)