The WALL•E set is the latest release from the LEGO Ideas platform, and has received a decent amount of news coverage lately, including plenty of criticism. In case you didn't know, WALL•E is the main character in the 2008 Pixar movie titled WALL•E.

The box, like all previous Cuusoo/LEGO Ideas boxes, is re-sealable. At least in the sense that you don't have to tear it apart to open it in the first place. The packaging is bright light orange, like most of the new colored parts in this set.

The smaller WALL•E papercraft design (not included in the set) was made by Julius Perdana (paper-replika.com), and he will be helping us today :)

Thanks to Sheo for helping me out with the photos in this review!

EDIT: turns out he has deleted all his photos, sorry.

The usual 1:1 picture on the side of the box is strangely a 3D perspective view instead of the usual side-on. This does not give it a very realistic true-size indication which kind of defeats the whole purpose of it being there.

The box contains 9 unnumbered bags and the glue binded instruction booklet. There are no stickers, or loose parts in the box.

The instructions contain a couple of pages describing who WALL•E is, and a bit about the designer of the winning LEGO Ideas set. The designer, Angus MacLane, was also the Directing Animator on the actual WALL•E film at Pixar.

There are no new part designs in this set, however there are plenty of parts showing up in never before seen colors. And by colors I mean Bright Light Orange. There are also a few new printed parts, and it's nice to see them instead of a sticker sheet.

The 4519 Technic Axle 3 part is notably new in Yellow, which I find quite strange. It is not easily visible in the completed model, and doesn't seem to serve any visual purpose. There doesn't appear to be any good reason why LEGO have gone to the trouble of producing it in this color, unless perhaps it's also being used in new sets about to be released.

"Oh my goodness! Shut me down. Machines building machines. How perverse." (C-3PO)

There's nothing too interesting or different in the initial build. The base of the robot is built up, which is basically a box with a few attachments.

The base of the neck is attached via a couple of 30387 locking hinge connectors which are strong enough to hold the entire head/neck without it falling down (see Head/Neck Issue below though).

The sliding arms are done via a rubber technic axle connector moving along a hidden 8L axle. The rubber part rests on a long tile part to give it some friction and stop it moving too easily while manipulating the robot. A pretty interesting way of doing things.

Next up, the back is covered with some nice paneling.

And then the front door.

And now the main body is done.

The side mounted tracks are built next and make nice use of four wheels to shape them. Like most models with tracks, they don't move very freely on smooth surfaces without applying a lot of downwards pressure to the robot. They work fine on carpet however.

Since they are next to what is effectively an empty box, there is plenty of potential to stuff some RC functionality inside which of course has already been done :)

The eyes are definitely the highlight of the set. There are a crazy amount of SNOT building techniques used here. They are used to give that distinctive look that is instantly recognised as WALL•E.

The arms and hands are fairly simple. They don't require many parts, and yet I think they look great - a very faithful recreation of the animated robot. The stripes on the side of WALL•E's arms are missing from the model though, an extra printed part may have been nice here. I guess they are trying to mimic it with the studs on the arm? 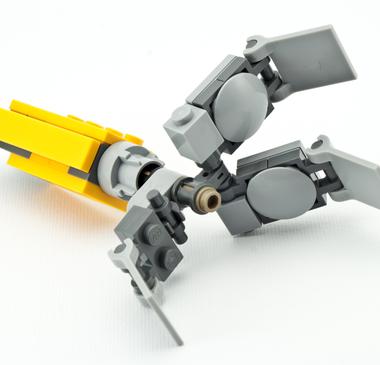 The plant in the boot is included in the model which is a nice touch. However, the boot looks nothing like a boot!

WALL•E has plenty of freedom of movement. The head can be made to look in nearly any direction (see Head/Neck Issue below).

The head can be lowered or raised to some degree. In the movie, WALL•E can completely hide his head/arms/tracks inside his body... which would be seriously awesome to recreate in LEGO but sadly unfeasible for this model.

His arms can slide back and forth, using the rubber axle connector part to hold it in place with a little friction. Unlike the movie, they cannot extend however.

And of course, the eye stalks can wiggle up and down a little, helping give WALL•E some character and emotions.

The front door can swing open to store any item, such as a rare plant one might happen to find on a deserted planet.

If you've been following any of the news around this set's release you will have heard something about an issue with the model's head/neck. There have been several confusing stories floating around, probably stemming from the fact that there are actually two issues. One - the North American version had a problem that didn't appear anywhere else (weak hinges at the base of the neck) which caused some stores to recall their stock. Two - the 'fixed' version still has an issue with the stability of the head.

TRY TO DO THIS

AND IT WILL SWIVEL AWAY

The reason the head turns so easily is that it is only connected via a single non-friction pin between part 47455 Technic Rotation Joint Ball Loop with Two Perpendicular Pins with Friction and part 32523 Technic Beam 1 x 3 Thick. 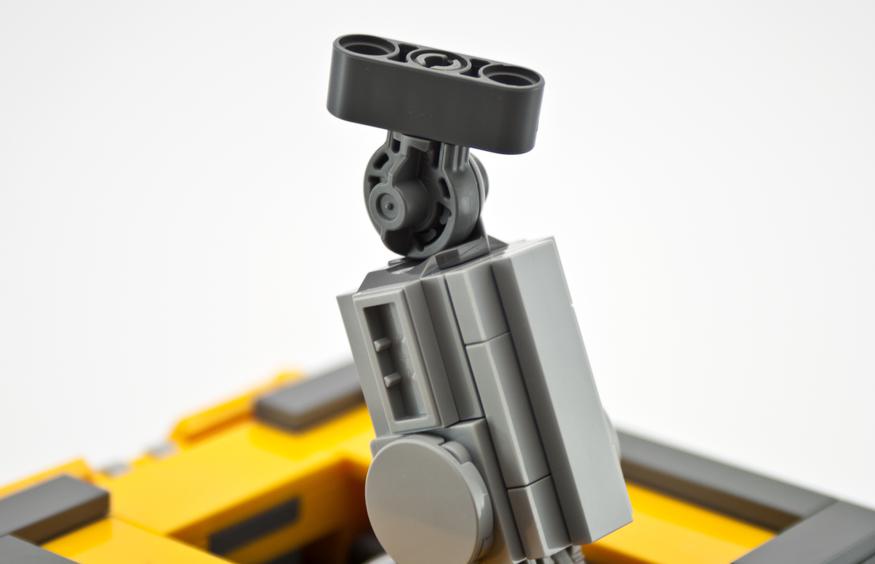 Chris McVeigh has published a very good fix that uses ball/joint parts instead. 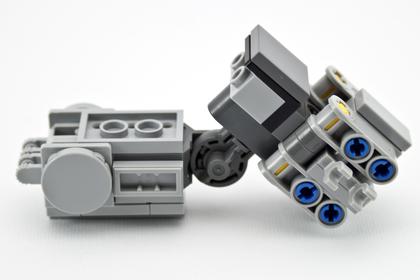 With this fix poses like the following are possible. However, the weight of the head can cause it to tilt forward in some poses so it's not a perfect fix.

I know the guys at LEGO Ideas have been listening to the feedback and take it seriously, but I'd be surprised if there was a revision made at this late stage.

The LEGO Ideas project was originally submitted in Oct 2013 and hit 10,000 supporters by Jul 2014. Then in Feb 2015 it was approved for production as the 11th LEGO Ideas set. During that time, the model went through several modifications mainly in the head and neck. It's pretty obvious that the changes were a huge improvement, and more accurately reflect the robot in the movie. This did perhaps make the head a bit too wide when compared with the animated WALL•E but it doesn't detract from the look.

Everyone in my family said this model was "cute" and you have to agree. I think WALL•E is an iconic Pixar character and a lot of people would be familiar with him. For that reason alone, this set will be popular.

The issues surrounding the head/neck might be important to some people, and of no concern to others. I suspect most owners will leave WALL•E built and on display, so the lack of stable movement won't really matter to them. It annoyed me slightly because it was tricky taking the photos I wanted, but if you have the parts to apply the fix there is no real issue.

For MOCers, there are plenty of new parts in Bright Light Orange which might make it an attractive buy also.

WALL•E is now available for purchase for £39.99 (currently delayed at US stores), or check other store prices and sales history here.